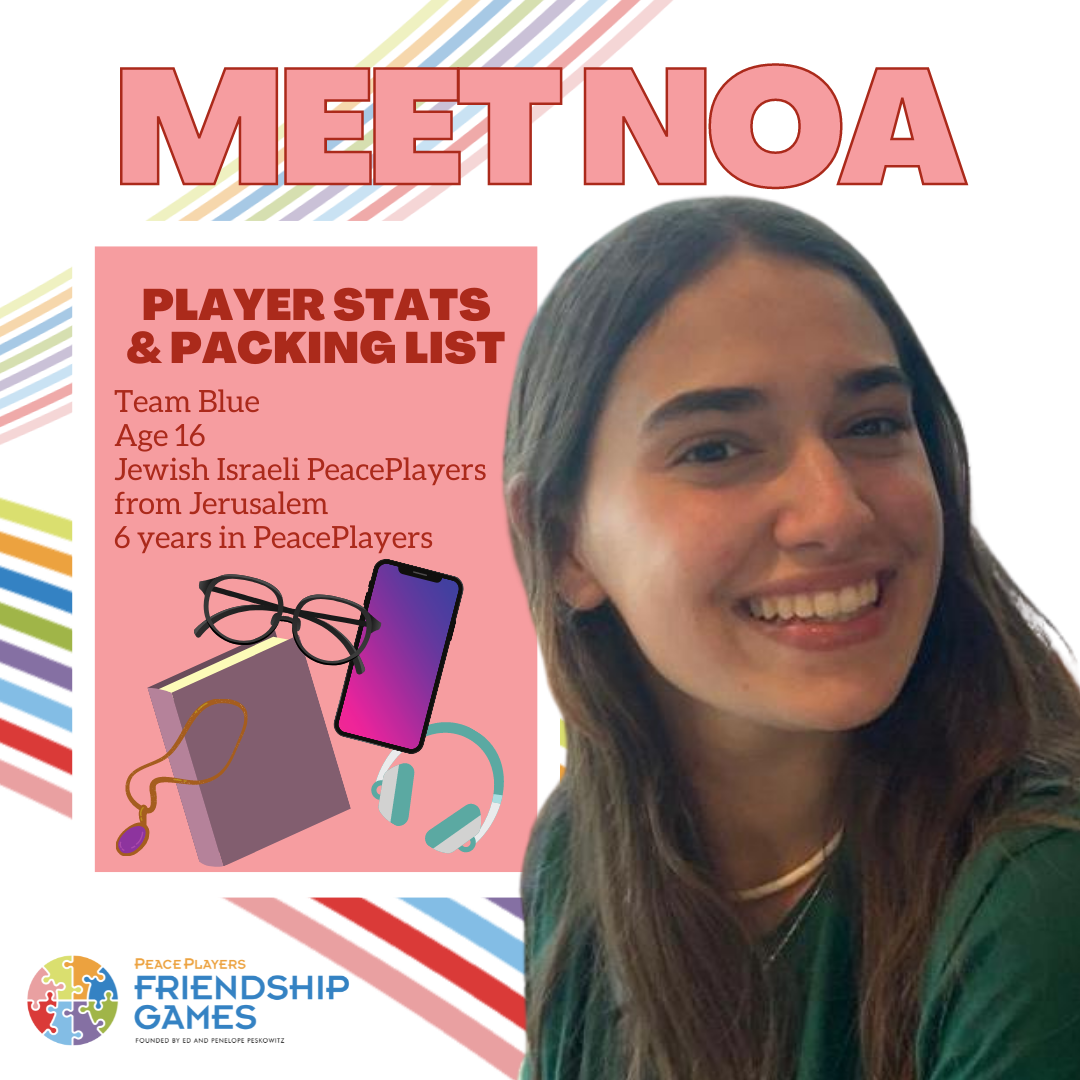 So I was actually born in the U.S., in San Diego, and moved to Israel when I was five and a half-ish, and I’ve lived in Jerusalem ever since, in the same neighborhood, in the same house for about 11 years.

I live in the neighborhood of Beit Hakerem. There’s mostly Jews in the neighborhood; I’ve seen Arabs once or twice. I did hear about the conflict day to day, but in school, it wasn’t really something that was talked about by my classmates in a good light for the Arabs, it was usually like stigmas and everything. But when I got to PeacePlayers, I started learning about the different sides, and how [the conflict] affects Arab’s lives, like how it affects their home life, their life with friends, and if they have other beliefs it’s dangerous to have them or it’s scary. And it’s hard to stand up for other people in the conflict for the different side.

When I’m not in PeacePlayers or at school, I like to hang out with friends, bake with them, or go on hikes or to the beach. I like to read books; I’m a bookworm usually, and and I wrote a short story, starting about like a murder mystery.

Q: What would you say has molded you into the young person you are today?

Q: What's the one thing that you'd want people to know about you?

I'm a hard worker. I try to get what I want.

Q: Do you have a special talent that most people don't know about/what's one thing about you that no one knows?

Most people don't know that I've played piano for about seven years.

Q: Who's your hero and why?

Oh, my parents. My parents have like two sides, one is the study side, so they really want me to succeed in my studying, but they want me to do it my way, and I need to ask for help and I need to be the responsible one and come to them if I have a problem. And the other side is the more free side, so they teach me about stuff outside of studying, if it's how to get good friends, how to how to judge people – like you should see who they are, but when you see that they're not the best person to try to back down and don't start a riot; try to back down and and be like under the surface, and really be observant of your surroundings.

Q: What do you think are the most important attributes of a leader?

I think listening is a very important thing, and having the drive because, if you don't have the drive to succeed as a leader, it really isn't really going to do anything.

Q: What are you most looking forward to about Friendship Games?

Meeting new people because we had two Zoom [activities with all of the Friendship Games participants] and I got to meet my team and they all seem like really amazing people, so I'm really excited to see them.

Q: Is there anything you're nervous or unsure about going to the Friendship Games?

No. All the meetups with everyone in PeacePlayers have been great until now, so I don't see a reason why this shouldn't be great as well.

Q: Why do you think PeacePlayers wants to bring together 130 young people from around the world?

I think it's to learn about other cultures and have new friends, because if you have friends from other countries, you can talk to them about maybe their conflicts, our conflict, maybe just help with school. And just learn about the cultures, because we all have so much [that’s] different.

Q: What's your biggest dream for the future - for yourself, for your family, or for your community?

Q: What's it like in your city/town/neighborhood? How would you describe it to someone who's never been there?

[My neighborhood of Beit Hakerem] is a really close knit community, like the community has a group chat. Almost everyone knows everyone. We have this cafe place, which the neighborhood built, people from the neighborhood, and it's very peaceful; it has a lot of trees and it's very green. And usually people there are very nice. Outside of Beit Hakerem, it's different because they have maybe attacks or just a lot of riots in certain parts of the city, and I have friends from Tel Aviv that didn't want to come, because they were scared. And for me, it's like a daily basis, so I was like, “Oh, right. That's not common in other cities.”

Q: If you could time travel for one hour, where would you go? What would you do?

I would go to the future because I'm a girl that doesn't really like surprises, and she wants to know what's up, so I would go like 10 years into the future and see where I am, where my friends are, where PeacePlayers is, I will just go and visit around.