Sekelani Primary school has been standing tall in Umlazi N section for 66 years and is the current home of 476 young students. Since PeacePlayers founding in 2001, the organisation has built dozens of courts across the eThekwini municipality. Sekelani Primary School was one of the original beneficiaries of a new court in 2001, credited to early funding by Laureus Sport for Good Foundation, Nelson Mandela Children’s Fund, and SASOL over two decades ago. Lucky enough for the school, teachers, participants, and PeacePlayers, the court is holding its ground today with a newly renovated surface. The court has withstood the times and has been the grounds for diligently guided youth development. On the 6th of May 2022, Sekelani Primary School hosted PeacePlayers and Assegai Primary School for an official court relaunch.

Sekelani’s court renovations were one of the five projects the KwaZulu-Natal Department of Sport, Arts and Culture (KZNDSAC), formally known as the KwaZulu-Natal Department of Sports & Recreation, allocated funds to PeacePlayers for in the FY 22 grant cycle. This process hasn’t come without difficulties and challenges along the way. The project endured multiple rain delays during its resurfacing and the well-known KZN flooding in April. “Depressions on the tar surface were deep [to start the project]. During the renovation process, the coating was compromised due to the depressions holding water for extended periods; similar to the way a damp wall ruins paint.” says the project manager, Vyash Ramluggan from Adriya Sports & Fencing. 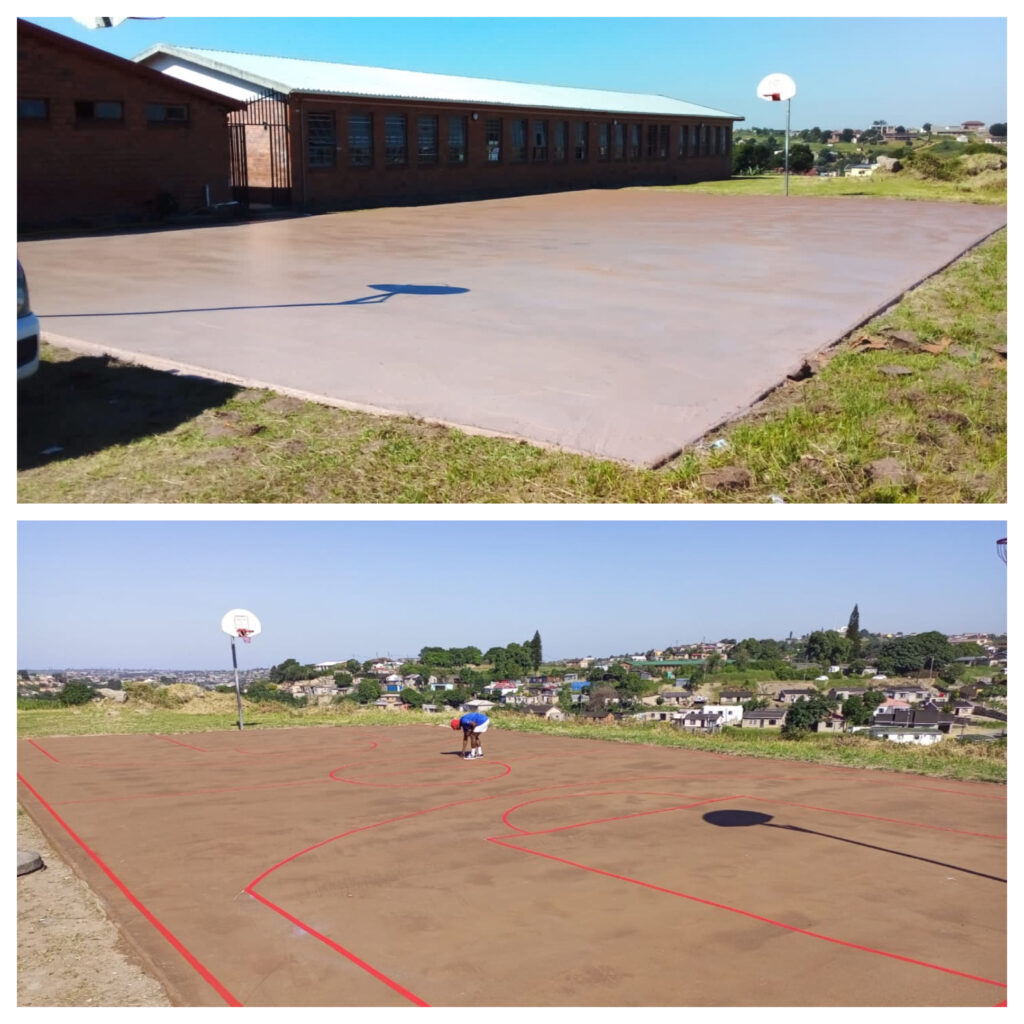 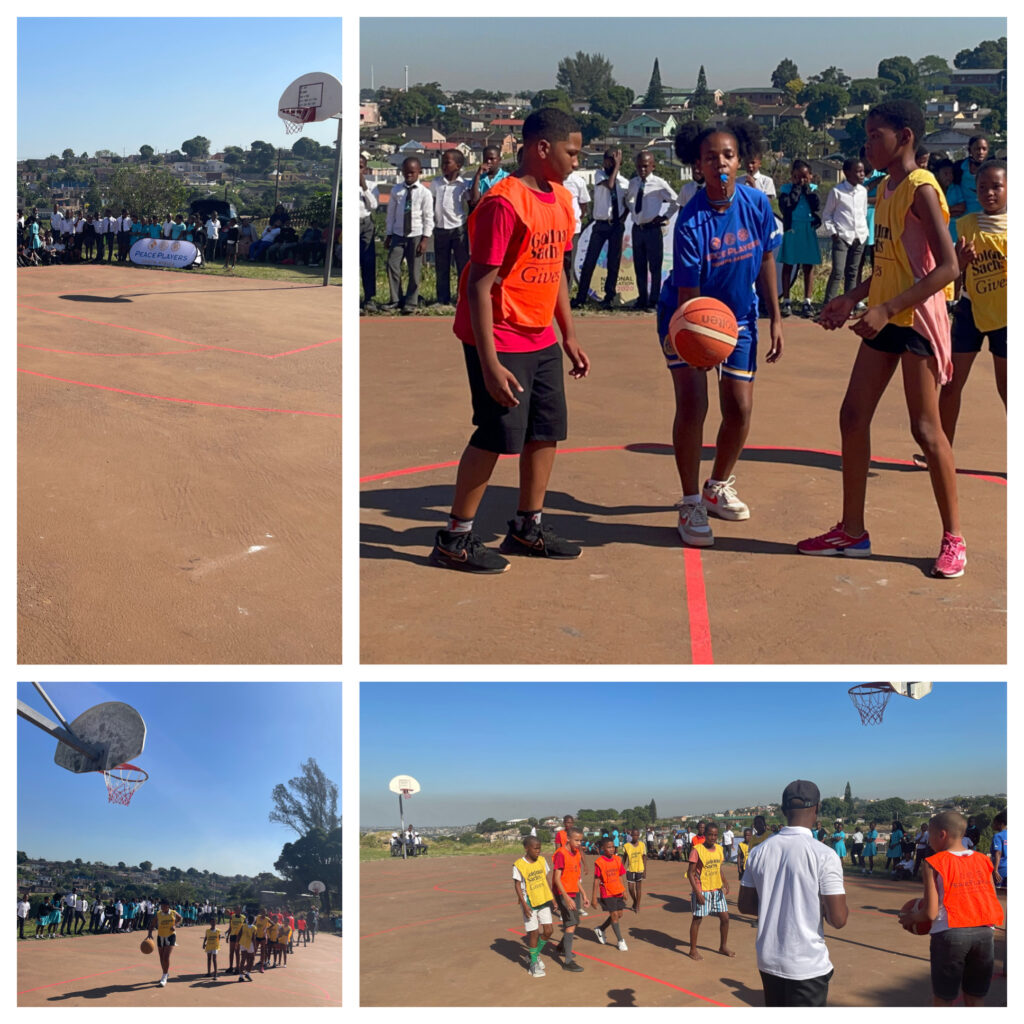 Nonetheless, his team got the job done, and the court was ready for relaunch day.

Most schools within the programme try their best to take proper care of and upkeep their respective court after construction. However, they are underfunded, and more pressing issues arise that make court maintenance an afterthought. Because of these challenges, Sekelani hasn’t had the luxury of keeping the court in quality playing condition. Instead, they have tried to make the best use of the limited space, sometimes using the court as a multi-purpose event space — for example, the court is known to host the community church services on Easter Sunday. However, the constant usage over time has worn away at the court.

Coach Sbusiso Yadi coached Sekelani from 2016 to 2019. He recalls the court having holes in its surface and grass growing between the cracks. He adds that after a rainy day or when participants came back for a new term’s session, they’d have practice with holes so big that they formed puddles, making it dangerous for the children to play.

This court must remain playable for the participants because it is the grounds for weekly sessions and games. The court also hosts schools from other communities, enabling new friendships to be formed and for participants to grow through learning from their peers’ experiences. These games continued on the 6th of May when Sekelani Primary School (Umlazi township) hosted Assegai Primary School (Wentworth) for an exciting start to term two (April – June) cross-community games.

The day began with nearly one hundred children surrounding the court. Mr. Mtshali, a teacher at the school, facilitated the day on the mic serving as the MC. First, he introduced Sekelani’s Principle, Ms. Ndolovu, and PeacePlayers Executive Director, Alison Misselhorn, to speak a few friendly words. Next, they thanked each other, the respective organisations/schools, and DSAC for their support in getting the court close to its original form. Then, before the games started, the well-known and multi-cultural national anthem Nkosi Sikelel’ iAfrica played, followed by a musical rendition from the school’s youth choir.

Once the formalities concluded, Mr. Mtshali emphatically shouted, “Mayi qale imidlalo (Zulu) – let the games begin.” The kids who weren’t playing surrounded the court, sang and clapped as they anticipated a successful basket for their home team. It was a competitive match, yet Assegai convincingly stole the show /or/ and Sekelani didn’t disappoint with a win on their new home court. Despite the competitive atmosphere, both teams were friendly and showed genuine excitement to participate in the event. Once the game concluded, both teams shook hands, then every child in attendance flooded onto the court to sing and dance together.

Umlazi native Coach Fezile Hlongwa now leads and coaches participants at Sekelani. She is a former Leadership Development Programme participant who has patiently awaited her turn to start her coaching journey. In her first three months as a coach, Fezile says, she has, 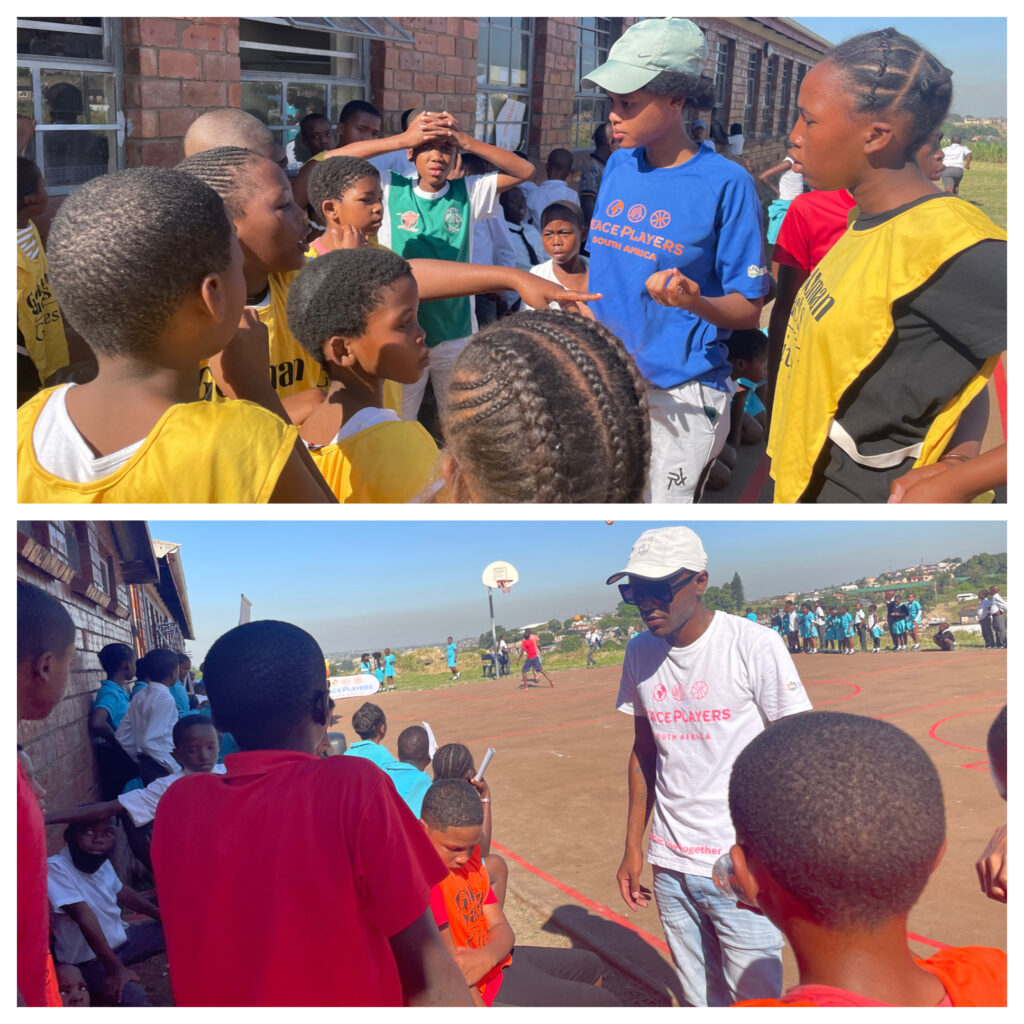 "Discovered that to be a great coach, you need to be involved not only on the court but off the court. I know what the children deal with outside the lines [being from Umlazi herself], so I’ve instilled discipline in them through my coaching. Seeing them happy makes me want to teach them more basketball skills. Thanks to KZNDSAC, now I’m getting more children interested in joining the programme once they see that we have a safe and newly renovated court."

It was only fitting that Coach Fezile’s opposing coach at Assegai Primary on the day was none other than Coach Sbusiso. The last time Coach Sbusiso coached with PeacePlayers was in 2019 for Sekelani when they won the City-Wide Tournament. Sbusiso says, “It felt good to be back where my PeacePlayers journey started, seeing the lines and court in a much better condition.” One of his young participants was grateful for the opportunity to play and be a part of what was taking place that day.

Assegai participant Matthew Lube said,” Today was my first time playing basketball against another team, and it feels good that Coach Sbusiso gave me a chance to play out here. I’ve never been to Umlazi before, and the atmosphere was so cool”. 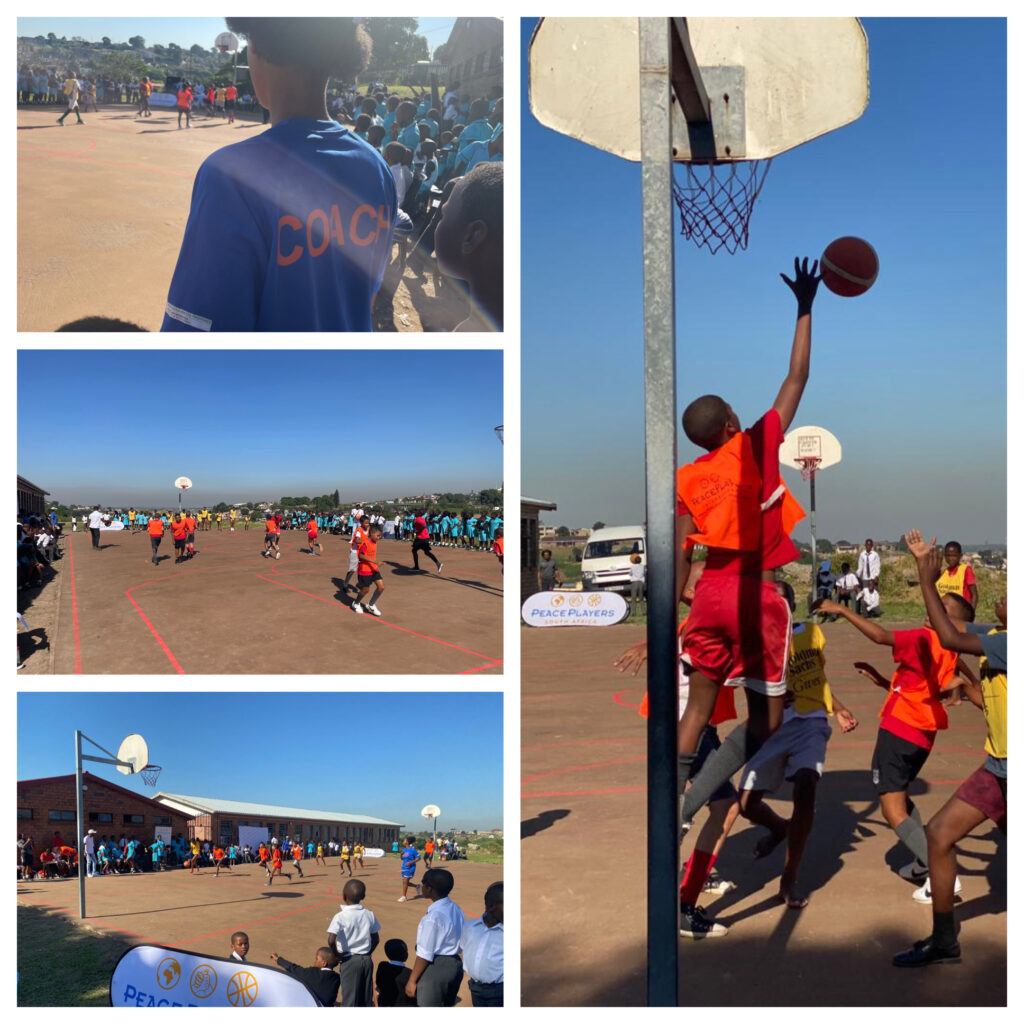 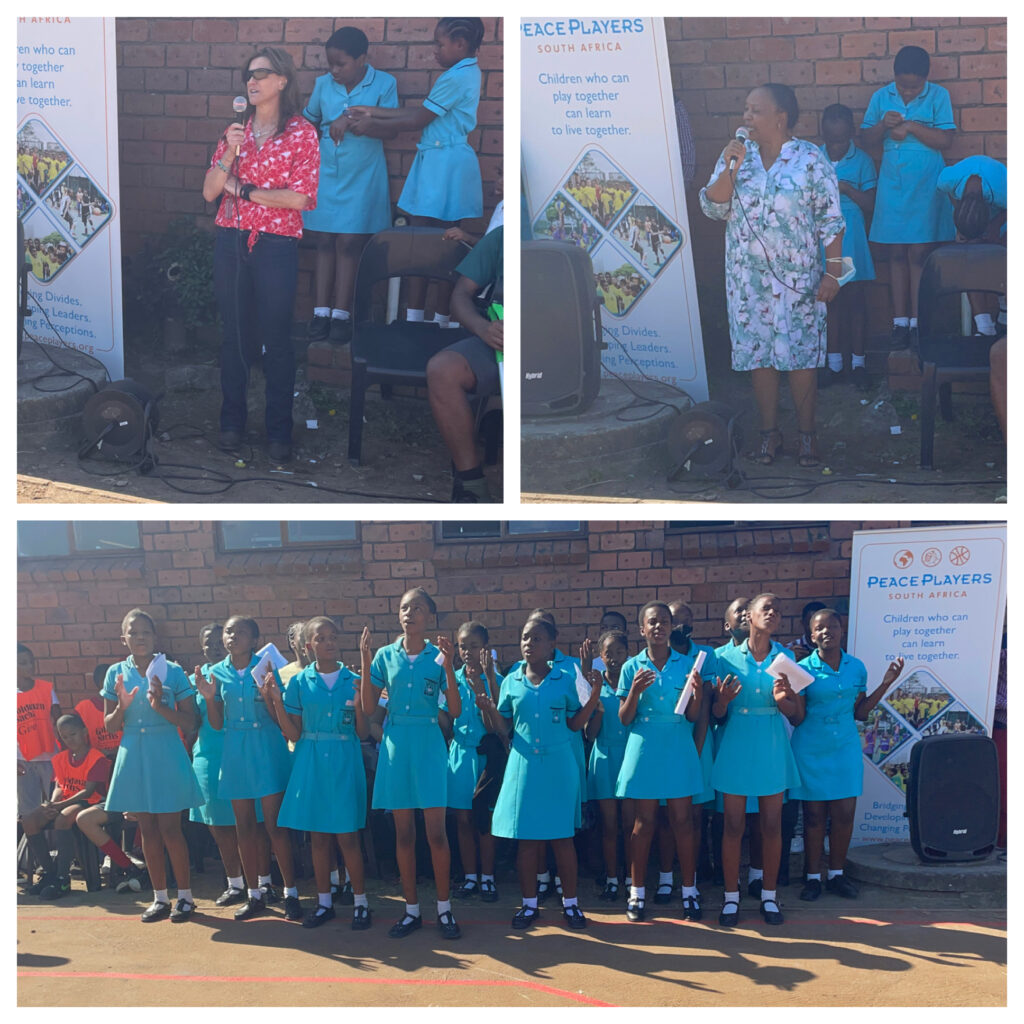 It was his first time playing basketball in a structured setting for a team. As a Coloured kid from a predominantly Coloured community of Wentworth visiting a Black township, it was a refreshing experience for him to play a new game, in a new place, on a new court surface. The staff at Sekelani is grateful for Coach Sbusiso’s role in encouraging the young learners at their school and beyond, to excel inside the classroom and on the court.

They recalled the first time (in recent years) their Sekelani children played white children. They came back eager to tell their teachers about the experience with Highbury Preparatory students and how fluid their conversations and communication with them were, some in Zulu and some in English. This cross-community game led to friendships that wouldn’t have been possible if it weren’t for Cross-Community Peace League games. Of all the comments Sekelani staff members made about PP-SA, one stood out: “Activities and programmes like PeacePlayers mean a lot in black township schools because they are rare and usually only offered in white schools. The sport has helped our kids build their minds outside the

classroom, giving them confidence, building discipline, and keeping them away from harmful activities that surround them on the streets at a young age – including drugs, alcohol, criminal activity, etc. Our kids are in very vulnerable positions, but this helps their self-esteem.” says Ms. Radebe. In addition to PeacePlayers after school sessions, the school makes a point to give their students homework every day to keep them busy, so the kids don’t deviate from their priorities or succumb to ‌their surroundings.

Sekelani Primary School basketball courts will be the grounds for many more memories during weekly sessions led by Coach Fezile and the cross-community games. Thanks to the support of school representatives, the KwaZulu-Natal Department of Sport, Arts and Culture, and PeacePlayers, the court will be put to good use for youth’s social and physical development in Umlazi N section and beyond.