"I Rolled My Eyes"

A Memoir by Coach Onyeka

I rolled my eyes as the anchors droned on dispassionately about how they were doing such terrible things. They were stabbing innocent people and causing unrest. Their violent tendencies were being exposed. This was inevitable, so they should just be extradited or repatriated or deported or whatever. I wondered if the anchors had ever met one of them face to face, or had actually been to this place they seemed to know so much about. I doubted these experts knew how beautiful it was there, how different from what they showed us and would have us believe. I rolled my eyes far back, back to when I was with them.

“So what problems do you deal with in DC?”

I reluctantly looked up from my schnitzel to find that it was Duha, one of the  Palestinian Young Leaders, who asked this of the group as she sat down and joined us. More specifically, she meant, What everyday struggles do we go through, as teenagers living in the DC-metropolitan area? 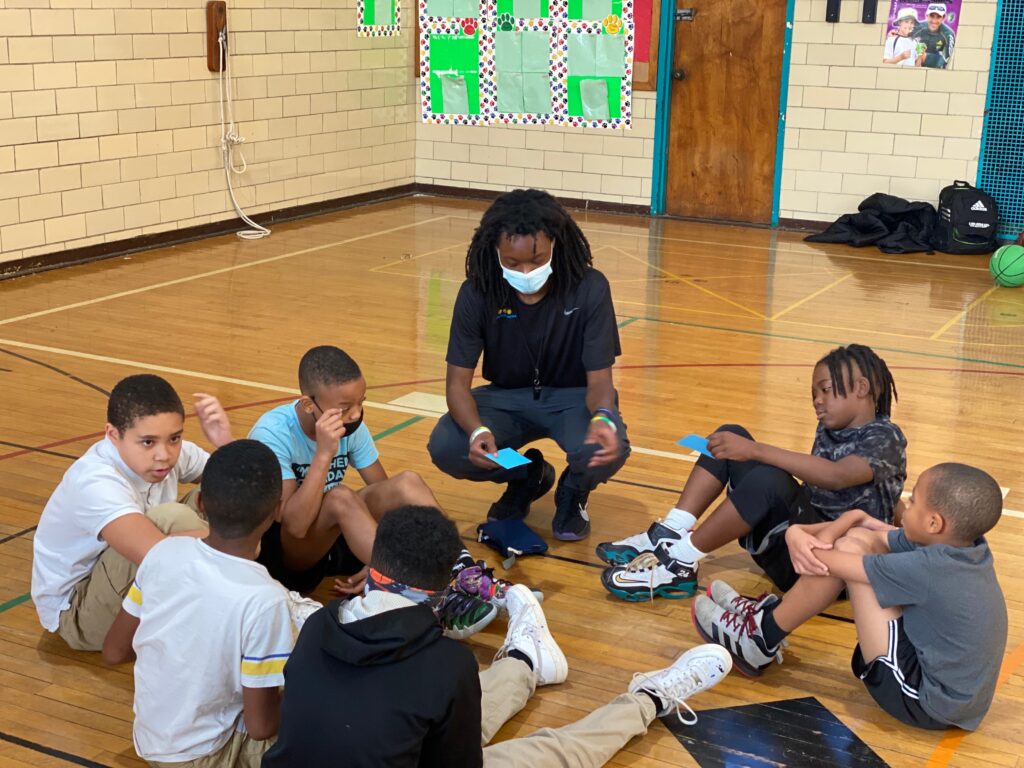 Matthew spoke first. He mainly said peer-pressure, financial issues were big, and that was pretty much it. We all agreed, Patrick bobbing his head in assent between gulps of Fanta.

I reciprocated. “What about you guys? What do you have to deal with here?”

Life as a teenager in the West Bank seemed a lot harder than my life in Maryland. There were differences in terms of the gravity of our daily concerns, but there were also overwhelming similarities. She explained the Conflict and the ways in which it carries beyond what we Americans see on the news. Although Duha’s community does not live in constant fear for their lives, the tension is there, like a rubber band that could snap at a moment’s notice.

“Like it’s there and a lot of people know it’s wrong, but for some people, that’s all they know. But also, it doesn’t come up all the time because we are not in each other’s company all the time, Jews and Arabs.”

Patrick stroked the beard he wished he had. Duha told us it was hard to even get her family and neighbors on board about PeacePlayers, not because they did not believe in the mission, but because this would be the most intimate interaction any of them had ever had with the other side. All the concerns that typically accompany allowing one’s child to play a team sport were amplified; no one really knew what to expect.

Palestinian girls did not have much access to sports teams, except through PeacePlayers, let alone familial support if they wanted to pursue sports.

“What? That’s not fair at all!” Destiny seemed horrified. So was I; we all were. Up until then, I am not sure any of us had truly realized how blessed we are to live in the United States, or considered the austerities kids our age in other countries have had to deal with. Matthew shook his head and tugged on his hair.

I ripped off a piece of pita bread to go with my food-for-thought. As I mechnichally dipped the bread into hummus and olive oil, I imagined a life without sports and shuddered at the idea.

Yet, everyone we encountered maintained such positive attitudes. Despite the struggles they faced, and the obstacles in their way, they exuded the kind of optimism and kindness that one cannot help but adopt. At no point during our trip were we privy to a pity-party, with the locals feeling sorry for themselves, discouraged by the realities of the culture and conflict in their region. Each participant and coach saw the bright side, something that many Americans fail to do when faced with a mildly unpleasant situation.

“What-a-do, shawty?” Duha giggled with a synthetic accent. We all enjoyed our mealtime conversation with her, and got up from the table laughing as she practiced some American slang.

But even before we ate, we had interacted as a larger group; the PeacePlayers Middle East (PP-ME) fellows told us their stories and answered our questions. The Palestinians were not the only ones with daily struggles. Jewish fellows talked about joining the army at age sixteen to fulfill their military service requirements. However, after learning about the Anatomy of Peace and even making friends from the other side, the last thing they wanted to do was fight.

Though the purpose of this trip was not political, in the midst of all the fun, something lingered at the back of my mind. It all began to make sense as we sat there. Me, Pat, Destiny, Duha, and Matt. An unlikely group joined by the sport of basketball. That was PeacePlayers in a nutshell. In that moment I realized that experience is the best teacher; one can never truly understand a situation until they have experienced it or spoken with someone who has. Even more than that, I finally understood the effect and necessity of organizations like PeacePlayers.

“Onyeka, is this the email you were talking about?” my mom had asked me. A few days prior, I had asked her to forward me an email from my basketball coach regarding our summer league schedule.

Naturally, this was not it; instead, I saw a forwarded message from a friend of Coach Coleman’s about a program for rising high school sophomores that played basketball. This got my attention.  I read on and learned that the program would culminate in a week-long trip to the Middle East. After a little research, I discovered the mission of the organization.

“I might want to do this,” I had replied at the time.

Now as I listened – really listened – with a more complete understanding of what the anchors were discussing, the concept behind PeacePlayers became very clear. I had just had the experience of a lifetime.

The fact of the matter is that difficult conversations need to be had, and progress needs to be made; this is true for all aspects of life. There is no time to sit idly by, while problems wait to be solved. The real situation in the Middle East is much more complex than the cut-and-dried portrayal in the news, and I gained a better understanding of the situation there as a result of my participation in this program. More importantly, I learned that this is where it starts; this is how it starts. I have taken the first step toward becoming an active global citizen. Not only that, but this is where world leaders come from; programs like PeacePlayers open one’s mind and challenge one’s worldview. Diplomats, politicians, public-interest lawyers, civil rights advocates, or simply socially and politically educated people dedicated to the betterment of society. Those are the kind of people PeacePlayers has set me and the 16 other blessed basketball players up to be, proudly representing the change we wish to see in the world.