How a small organization leads to lasting, global, Impact

The story of PeacePlayers Cyprus

In 2007, the quest to use basketball to bridge divides around the world took PeacePlayers to the tiny Mediterranean island of Cyprus, which for 30 years had been split by the UN Controlled Buffer Zone. This “Buffer Zone” consists of UN barracks, derelict buildings, various military checkpoints, and fencing that has divided Greek Cypriots and Turkish Cypriots across the island since the armed conflict of 1974.

The inception of PeacePlayers in Cyprus came about through a relationship with the U.S. consulate in Durban, South Africa, where PeacePlayers had been running programming since 2001. PeacePlayers’ contact at the consulate was moving to Cyprus and was keen on bringing something like PeacePlayers to the small, divided island, which at the time had no sports programs that brought young people from the two opposing communities together. After some research and making the necessary early connections, like the United Nations Development Program (UNDP), a pilot program was launched in 2006 and formal registration for PeacePlayers Cyprus was established in 2008. 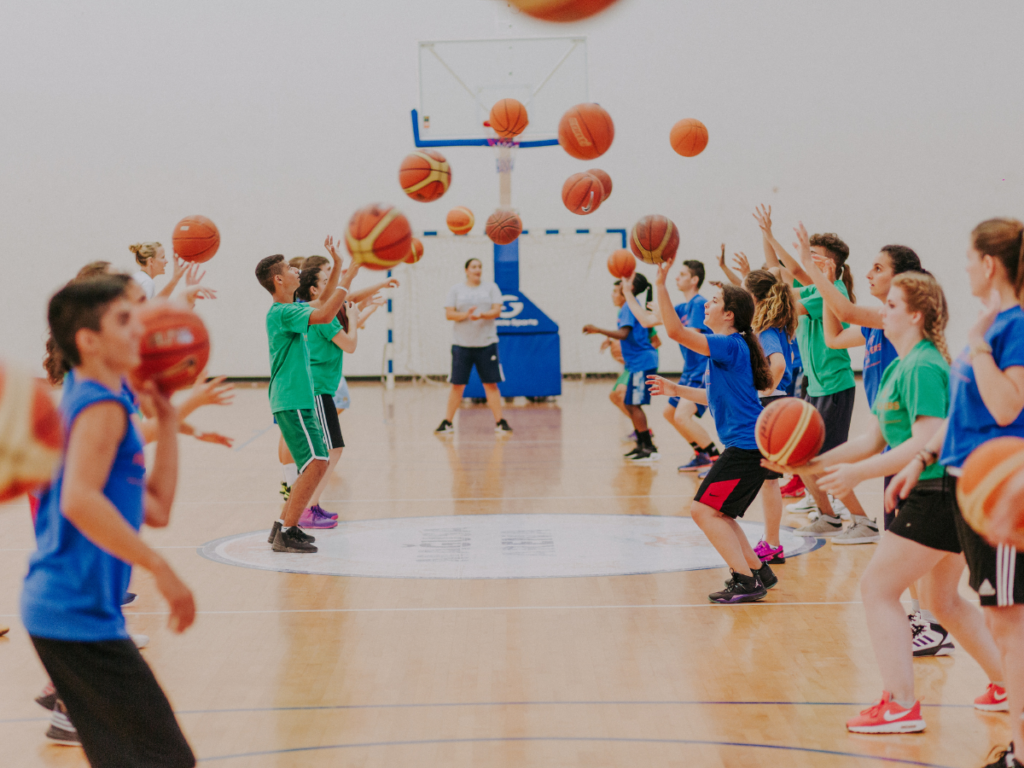 Similar to the other PeacePlayers sites to that point, PeacePlayers Cyprus was initially led by a team of Americans whose job it was to get young Greek Cypriots and Turkish Cypriots excited about basketball. And just as similarly in those other sites, being seen as an impartial outsider helped build relationships between groups that still had a lot of mistrust amongst each other. Brian Shea was one of the initial directors who worked with local stakeholders to foster cooperation across the divided island. In order to establish roots for the organization to grow, Brian’s team spent much of its time crossing the “Buffer Zone” to meet coaches and teachers from the northern and southern parts of Cyprus. And as the organization on Cyprus slowly grew, so did PeacePlayers globally; moving away from American led operations, sites began hiring local directors.

In March 2009 Marina Vasilara assumed the role of PeacePlayers Cyprus’ first local managing director. Prior to that, Marina had been serving on PeacePlayers Cyprus’ local board and worked for the United Nations Development Program (UNDP), a key funder. In those early days, Marina says, “We were pretty much starting from scratch; we had to put together a human resources strategy; a strategy for the organization to grow. We saw a lot of potential in the organization. However, sources of funding were not very easy to secure at the time, so there was a lot of inconsistency.” 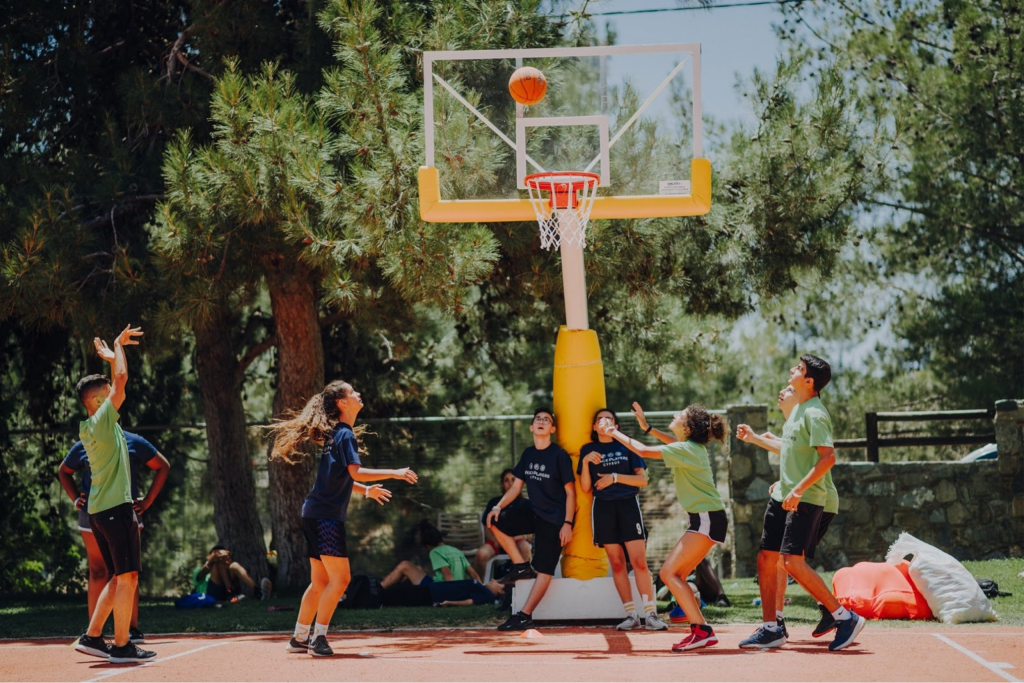 The funding challenges were a sign of the times, says PeacePlayers Cyprus’ current Managing Director, Jale Canlibalik,  “Trying to get people to buy into the work that you’re doing would have been met with so many barriers. The concept of using sport as a peacebuilding tool, it’s [a] strange concept now to people, so I can’t imagine back then 2006 – 2010.”

In these circumstances, everything — from the planning and strategy to the bookkeeping — fell on the shoulders of Marina and the two American fellows assisting her. “Everything had to be done yesterday,” says Marina. She continues, “We didn’t have enough people, and you know we wanted to recruit children, children were being recruited, but we’re looking constantly for funds for coaches. It was definitely not a nine to five job.”

In addition to funding, the mistrust between Greek and Turkish Cypriots made

the work even more challenging. The UN Controlled Buffer Zone had only been open for crossing since 2003, so there were many technical difficulties involved in crossing, such as passports and parental permission, which were both difficult to acquire.

“Some families were directly impacted by the war in 1974. I remember a mother whose child was in the program. We were on a bus going to a tournament on the ‘other side’ of the island. She was crying with tears coming down her face and said, ‘it's so hard for me to do this, it goes against everything I was taught.’” These are the perceptions and prejudices PeacePlayers was combatting on the ground. Despite these feelings, people wanted a better future for their children. The mother on the bus continued, says Brian, “but I want my kids to experience something else.”

The relationships the initial directors, that Marina would later expand on, started to pay off. In 2007, they started working out of the UN Buffer Zone, bringing school groups to the famous Ledra Palace Hotel across from where PeacePlayers Cyprus is now located. Meeting in the Buffer Zone made it easier for youth from both sides of the island to come together and helped PeacePlayers Cyprus build momentum. With more time, PeacePlayers was able to bring children from the north to the south and vice versa. On their first attempt, in 2007, of one-hundred and twenty children they were working with in the southern part of Cyprus, they were only able to bring a handful to the northern part. At the time, this was considered a huge achievement. It encouraged her and the Cyprus team to invest more time and create more opportunities.

For Marina the biggest moments came during the annual overnight summer camps held in the Agros Mountains.

“Those stereotypes [between traditions] breaking down when you actually live with someone for a few days. Then kids in the summer do not have all these worries about school about being on time and this and that so really the transformation takes place during the summer time."

It was her first week when she was made aware of the organization’s challenges, AND they were hosting a Norwegian group from the Nesodden IF Basketball Academy. While riding around on bikes and walking around Lefkosia/Lefkoşa/Nicosia with the group, she thought to herself, 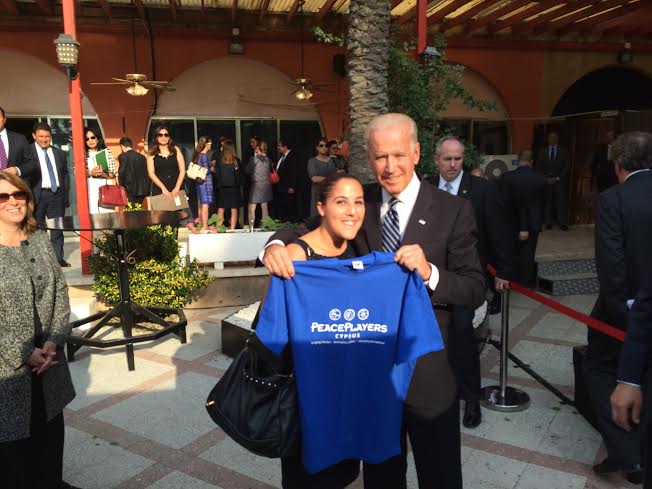 “Why am I here? Why did I leave the comfort of my previous job?,” recalls Jale. That is until the bike ride ended and they went into a basketball court where she was able to witness first hand Greek and Turkish Cypriots playing together on the court. On her goosebump moment, “[I had] a moment of ‘Okay, this is what I want to do, this is what I was meant to do.'"

Having found her footing and her purpose, Jale euro-stepped around the challenges. “The proposals just started flowing after that, and [PeacePlayers Cyprus] was in such a good position that it got to the point where we didn’t need the stipend from DC anymore,” says Jale.

Jale describes how the ‘stars aligned’: “All of a sudden, we’ve gone from having no

Now financially stable, Jale also started to notice something else about PeacePlayers. Despite how connected PeacePlayers is as a global network now, in 2021, this wasn’t necessarily always the case. Jale states that when she first joined, she was struck by how little the sites were talking to each other. But, as she was finding success with securing funding, new opportunities for connections with the other PeacePlayers sites arose. And in 2015 PeacePlayers Cyprus invited staff, coaches and young leaders to participate in their annual summer camps held in the Agros Mountains. Jale says their first attempt was an instant success. “You could see instantaneously; everybody just gelled and meshed. The kids had an amazing time. Some of our kids still consider that being the best [experience], even our coaches consider that to be one of the best experiences they have had.” From there on, the annual summer camps were now bringing more than Greek Cypriots and Turkish Cypriots together; young people from South Africa, Northern Ireland and the Middle East were connecting, and PeacePlayers’ impact was growing.

These ‘interregional exchanges’, as Jale puts it, were built on the foundation of grit and determination set by the initial directors and the PeacePlayers Cyprus team to create positive change for Cyprus and beyond — to keep bringing young people from a divided Cyprus together, despite the perceptions, despite the long days and struggle for funding. This hard built foundation allowed PeacePlayers Cyprus to flourish and impact PeacePlayers around the world.   “Bringing the sites together, it was the first time that PeacePlayers had ever done that at that scale. That was quite a big moment for Cyprus, that we, as the smallest organization of PeacePlayers, were able to pull off and secure the funding, and bring everybody,” said Jale.

Interested in learning more about the impact PeacePlayers Cyprus is having today? Follow our 20th Anniversary Campaign through the months of October, November and December to learn more! And be sure to follow PeacePlayers Cyprus on social media @peaceplayers_cy.