From a Pick-Up Game to Major League:

James Magowan, a resident of the border area of South Armagh, and long-time board member with PeacePlayers Northern Ireland, can still recall the first time President and co-founder of PeacePlayers Brendan Tuohey walked into his office at the Community Foundation for Northern Ireland in Belfast. “I was the designated person to speak to [Brendan] because our organization was committed to peacebuilding and I did play basketball in my day, so I was more than interested to meet him, and from that moment on, I got involved.”

It was just four years after the Good Friday Agreement that heralded a political settlement to the 40-year sectarian conflict known as “the Troubles”, which included violence and segregation between those who identified as British/Unionist/Loyalist, commonly generalized as Protestants; and those who identified as Irish/Republican/Nationalist, commonly generalized as Catholics. While the borders and military checkpoints that existed throughout the Troubles were gone, the divisions and distrust were still very much present.

When PeacePlayers began operating in Northern Ireland, programming started in smaller communities, such as the town of Dungannon, where folks from different traditions would all frequent the same local leisure and sports centre, which therefore presented a prime setting to bring people together. Additionally, basketball was perceived as a neutral sport; it had no political or religious affiliation with any of the existing traditions in Northern Ireland. These factors made it relatively easy to bring Protestant and Catholic young people together.

This, and having a group of enthusiastic and outgoing American fellows running programs. Those fellows certainly made an impression — James recalls that some formed a band that played music in local pubs, and that another was seven feet tall, which certainly made them stand out in a small town like Dungannon.

Even still, according to James, PeacePlayers’ while the original focus was to provide an environment where Protestant and Catholic children come together,

“The very early stages were very unstructured. [It was] before we'd ever sort of had a curriculum or anything like that around community relations, personal development, and that sort of stuff. But they were just doing that organically. They just knew the ethos was bringing kids together from different communities. Let them learn to play together and they can learn to live together.”

Staying away from overt peacebuilding activities wasn’t entirely by accident. During those early years in Northern Ireland, many in the wider public did not yet recognize the need to build bridges between people of different backgrounds, and in fact many were averse to such efforts. As a result, James says that programs operated “almost like the Trojan horse… I remember one time enquiring at the leisure centre in Armagh about the Playing for Peace basketball, and they said, ‘oh you mean the American basketball,’ and that’s how they referred to it. Because it was just as these American guys that were booking the court. PeacePlayers, or the peace building activity, was sort of just quietly brought in  … If they thought it was a community relations exercise disguised as basketball rather than basketball disguising a community relations exercise, they might not have been so comfortable.”

After starting the program in leisure centers, PeacePlayers began branching out to schools, however still with no real curriculum or focus on impact. “I don’t even know what the goal was at the time,” says Nicole Breslin, a Sessional Project Coach who had originally encountered PeacePlayers as a participant in Derry/Londonderry way back in 2005. Nicole’s school team was coached by PeacePlayers and they played in the school basketball league. The thing is, over 90% of schools in Northern Ireland are segregated along sectarian lines, and so during those activities, Nicole’s only chance to see youth from other traditions was at PeacePlayers tournaments. However at the school tournaments they played against each other in what were essentially single identity teams, so Nicole did not get to interact with different youth in a meaningful way. Nicole’s first time learning about the goal of PeacePlayers was when she came back as a sessional coach while a university student in Belfast.

PeacePlayers, both in Northern Ireland and globally, began to realize the need for greater structure. For Northern Ireland in particular, this coincided with wider understanding among the general public that, even though there was a peace agreement, peace didn’t happen overnight. James reflects, “PeacePlayers was, [by] 2006-2007, becoming more structured, and then peacebuilding was less of a politically charged word and one that was recognized as an important job that would need to be done over a period of time and so that’s when I think we really felt we had a little bit of a track record, we had legitimacy to do this and a recognition that we were doing the right sort of thing.” As these shifts were happening, famed Northern Irish author and experienced community relations facilitator Tony Macauley worked with PeacePlayers staff to develop a curriculum that would drive home impact and relationship building. These changes, along with growing public recognition that peace needed to be invested in, led to 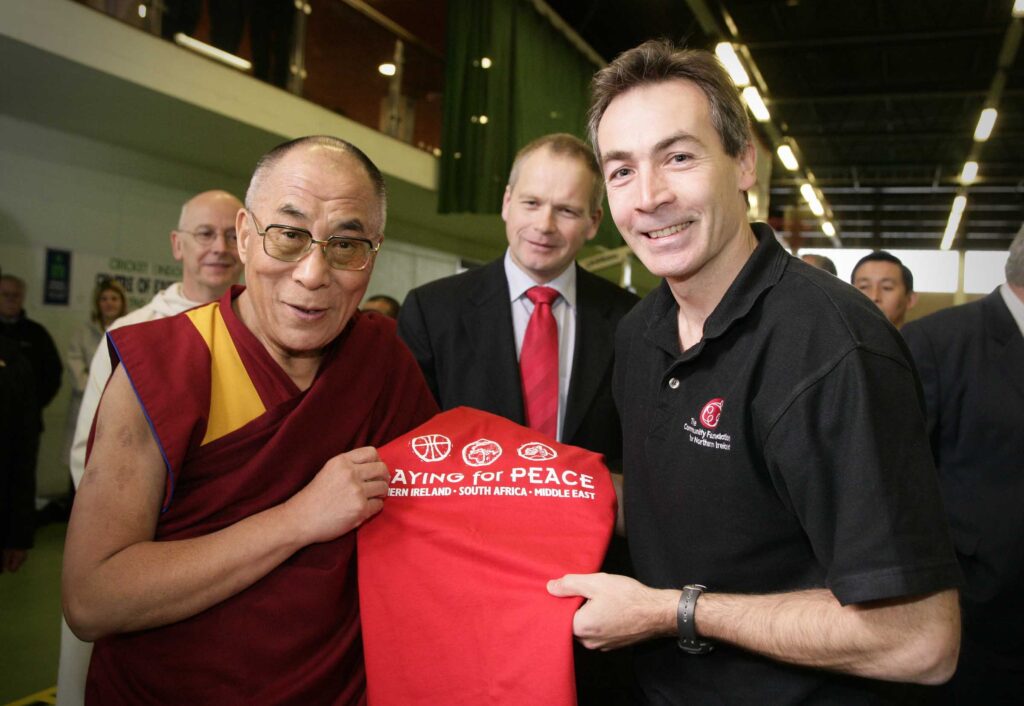 more opportunities for funding, and an understanding that now was the time to move into the most difficult, socially deprived areas of the conflict — many of which were in Belfast.

To address the changing tides, PeacePlayers in Northern Ireland moved house from the small country town of Dungannon, where programming was more focused on unstructured after-school programs, to the capital of Northern Ireland, Belfast, where impact and intentional cross-community work was the focus.

There, their work in Belfast grew and caught the eye of Ireland Rugby star, and current chair of the board, Trevor Ringland, from Ulster province. On his initial involvement with PeacePlayers, Trevor says, “I was asked to assess the project by the American Ireland Funds and was just impressed with the people that were involved with it… And the fact that it wasn’t just sport, it wasn’t just throwing a ball to the kids to play together, it was actually something that was having the hard conversations with the kids.” Not only was PeacePlayers attracting the attention of local celebrities, but its work caught the eye of ESPN, and in 2007 PeacePlayers Northern Ireland and the vision of the Touhey Brothers was awarded the Arthur Ashe Courage Award for its work bringing a divided community together. PeacePlayers had gone prime time. But there was still a lot of work to be done.

Globally, PeacePlayers was beginning to shift towards greater local management and governance. In Northern Ireland, previous program directors Kris Cates Bristol,Thibault Manekin (PeacePlayers co-creator), and Kelly Lyons had worked alongside an established local board for a number of years. But in 2009, following similar organization shifts in the Middle East, Cyprus and South Africa, PeacePlayers Northern Ireland hired its first and only Managing Director, Gareth Harper. “To build the capacity of a team around [Gareth] and really put [PeacePlayers Northern Ireland] on a financial footing from which you could really have a development plan,” was critical to long term sustainability, says James. While the move to local leadership was key, that interconnectedness with the American fellows still played an important role in managing and implementing programs. But even that has slowly changed over these past 10 years. “We have more local coaches in an area (of programming), which I think helps [with] relationships because it’s more long term, whereas the fellowship, it may be a year or two, then those relationships [end], and have to be built up again,” says Nicole.

Sixteen years on, Nicole shares how things have changed since her early experiences with PeacePlayers Northern Ireland: “[As a participant] I only did basketball really, whereas [now] in Northern Ireland, I think there’s a huge focus on the community relations side of things. We would have programs that don’t play basketball; it’s all leadership development,” said Nicole.

Trevor goes a step further recognizing how there are more global connections now, more than ever,

“That interconnectedness between the sites, to me, is a really a really good thing, even though the problems are often quite different between the different sites, but James is still involved I'm still involved as you know, I think that that maybe speaks for itself. It proves that the future for those societies can be different and better.”

As for James? He can see a bigger picture. “For kids that have been through as PeacePlayers from primary school engagement as participants, then into leadership programs, to becoming engaged with PeacePlayers as coaches and some as donors as well, they’ve gone that full ‘play together – live together’ cycle. It’s very pleasing to have seen something right through from those early days when Brendan walked into the office.”