PeacePlayers-Baltimore’s Leadership Development Program (LDP) participant, Danica Miller, is actively showing why she is destined for greatness on and off the court. Some childhood achievements grow to become forgettable distant memories, but we’re confident that Danica’s natural poetic genes will withstand the test of time beyond her childhood.

Sports, soul food, and creative forms of expression. These are a few of the things that keep Danica interlinked with her family, whom she considers her foundation. While she proudly claims Columbia, South Carolina as her birthplace, since age 4 she has called Baltimore, Maryland home. 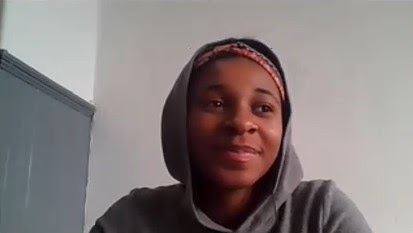 Moving to Baltimore at an early age instilled a thorough understanding of valuing family and sticking together. No matter what location they were in, Danica recalls her family bonding through cooking together throughout the year, but especially on holidays. As a result of this shared time together and her acquiring cooking skills from multiple family members, she’s taken on some of their traits and characteristics.

When discussing her twin sister especially, Danica’s smile lights up a room. Her twin, Lauren, acknowledges that Danica is the “natural born leader” out of the family. She describes Danica as “an adventurous and bold person who enjoys writing poems and incorporating her favorite color, pink, into her daily activities.” On the other hand, Danica describes Lauren as “a shy, smart and confident person who enjoys drawing and dancing.”

Danica admits that their “artistic inspiration and natural abilities” likely comes from their Dad, who is a longtime poet that shared many of those family meals with them. His poetic journey began in high school when he yearned for an outlet to express the feelings he experienced through different stages in life. Although these three share some differences, they possess more similarities in how they creatively express themselves as artists. For every blank piece of paper, another opportunity arose for Danica and her Dad to create a new, poetic recipe.

NBA All-Star Kyrie Irving has called basketball an “art form.” Some of Danica’s cooking and poetic artistry indeed translates to the court, and in her off-court leadership and teambuilding activities with PeacePlayers. Ideas turned reality has been the story of Danica’s life as it relates to her realizing her creative ideas.

According to Baltimore Director, LaToya Fisher “It was Danica who initiated the idea of having an informal, virtual ‘Chat and Chew’ meeting on Thursdays where they bring snacks and play games.” During one of these “Chat and Chew” sessions, the idea of reciting a poem in front of peers during the Cultural Twinning came about. After learning about the poetic genes and history of poetry in Danica’s family, LaToya and Baltimore Program Manager, Chineze Nwagbo,
encouraged her to construct a poem centered around her experience with PeacePlayers. After the idea was formulated and the support was put in place, the rest was history.

Danica loved the idea of reading a poem because she found prior success in reciting poems at elementary school competitions. The first poem she recited was in 3rd grade at a “college-bound” contest. The judges of the contest provided the beginning of a sentence and the contestants were tasked with finishing the sentence with a poem. Danica recalled the judges asking her to finish the sentence, “With college, I can..” She went on to win the contest two years consecutively. This poem with PeacePlayers, in front of nearly 100 peers, would be a bit different in being virtual and amongst a global network of young people. When asked about her feelings before reading the poem, Danica says she “was nervous, yet eager for this moment.” She wanted peers to see PeacePlayers through her lens as a participant in Baltimore.

Take a look at the video of the poem and transcript below:

PeacePlayers is a world of fun, you get to learn, play, connect and run.
We see people as people, and we use our voices for change.
We walk out confidently, standing firm in our leadership with hopes for a better tomorrow and
strong community relationships.
As we enter the next stages of our lives, be sure to take heed to what we learn.
Being a part of PeacePlayers International opened our eyes to many valuable lessons we will
always affirm.
Like on the court, dribbling behind the back, moves to be done on the court.
When you step into the world, using your mind, your heart to see the world’s curve.
The fans will shout, there’s nothing like basketball.
But a true PeacePlayer knows that basketball is just the start.
The platform and hook to a life full of imagination and a powerful heart.
So raise your left hand up high and say PeacePlayers on “3” and family on “6”, because
collectively we represent a beautiful piece of art.

And united we stand as a phenomenal team.

How awesome was that? The execution was a seamless success that garnered the claps and snaps of fellow attendees and coaches, some shouting “Go Danica!” as Danica does a virtual wave of gratitude to everyone cheering her on.

When asked about her favorite part of the Global Friendship Games Twinning activities so far, Danica notes that she especially “enjoys learning about the culture in the Middle East, developing friendships virtually with various sites, and hearing different accents.” Her fellow LDP team members are prime examples of embracing a culture of collaboration, seeing people as people, and inside-out transformation through these interactions to develop cross-cultural understanding.

As Danica reflects on her progression with PeacePlayers, she acknowledges that she wasn’t always a big fan of basketball and was hesitant to participate in sessions early on. Her original introduction to PeacePlayers was in 2018 at Oliver Recreation Center Summer Camp. Danica’s time with the organization changed her thought process as it relates to her interactions with peers, coaches, and family members. Danica vividly recalls the days before joining PeacePlayers and notes that “if someone did something negative to me, I would always blame it on them versus looking inward. Since being a part of PeacePlayers, I ask myself, what might I have done to contribute to the problem and how can I work toward a solution?” The PeacePlayers mantra “see people as people” has resonated with her and amongst her friends who she regularly invites to participate in PeacePlayers sessions. She’s now blossoming into one of the most active leaders in Baltimore who isn’t afraid to speak up and bring her ideas to life.

Danica and her sister Lauren made a pinky promise to collaborate on a project together soon which PeacePlayers looks forward to seeing become another executed idea. Danica will craft a poem that directly relates to a drawing her sister will create. According to the two, Danica has always been the voice for the two of them given her personality. It seems fitting that Lauren enjoys expressing her ideas through drawing while Danica enjoys reciting poems.

As seen in the video above, LaToya describes Danica as a charismatic and intelligent leader while Chineze describes Danica as transformational with an indomitable will. These are all characteristics that align with the reasons her sister places so much trust in her to lead and why she decided to recite her poem during Northern Ireland’s Twinning. PeacePlayers is confident that the world will one day see her talents. We hope to see Danica on our television screens reciting more poems in the future, as well as exploring her career in acting. This was not just a rare moment where she took a risk, but these are the type of
moments we know she’ll continue thriving in. Let the world hear your thoughts and be your canvas Danica, your PeacePlayers family is rooting for you.