A National Anthem for the Rainbow Nation:

South Africa Leads PeacePlayers from around the World in Song

The South African National anthem containsnot one, not two, but five of the country’s 11 official languages –Zulu, Afrikaans, Xhosa, Tshwane and English, the most common languages in South Africa. But it wasn’t always like that. Before the brutal policy of segregation and white supremacy, knownas Apartheid, ended in 1994, the national anthem was an Afrikaans song that was viewed by the non-white majority as embracing the process that led to Apartheid. 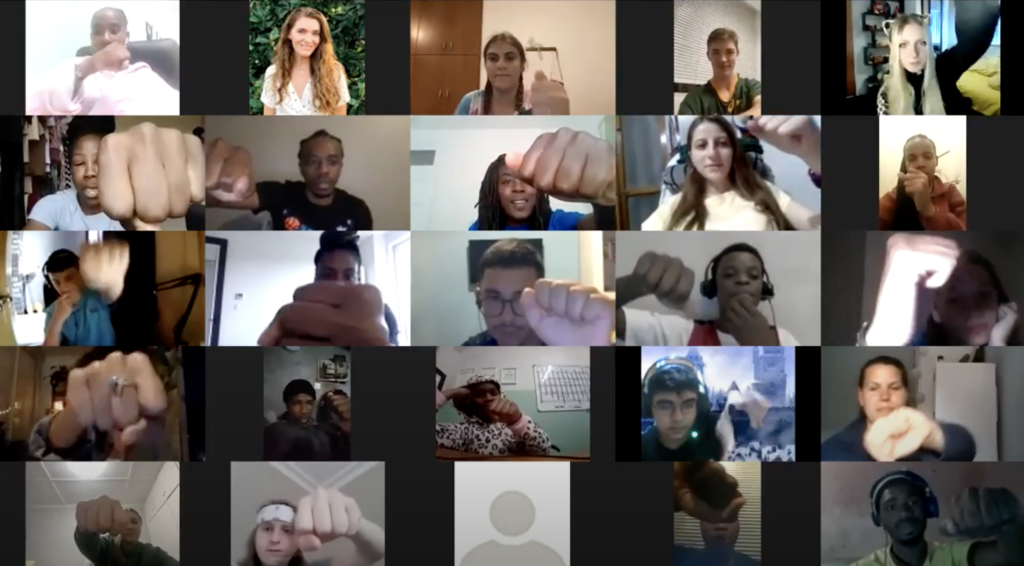 When Apartheid came to an end, the new regime actually kept that problematic anthem, but also adopted a second anthem in the Xhosa language –Nkosi Sikelei i’Afrika –which had been used among black South Africans in the anti-Apartheid movement. The dual anthems were actually debuted at Nelson Mandela’s inauguration in 1994.

But having two anthems proved to be a little awkward, and it would take five minutes to get through both. Imagine being at a game and having to wait five whole minutes for the action to start, standing by while two national anthems finish up. That’s why, in 1997, the two anthems were merged. Lines borrowed from both songs were changed to be more representative of all South Africans, and not just those from a specific race, culture or religion.

It was clear in the twinning that the youth leaders from South Africa who were leading the breakout rooms were proud of their national anthem. After a trivia session about Youth Day, a South African holiday commemorating the Soweto uprisingand celebrating youth activism, the team from South Africa led Team Truth, Team Justice and Team Peace in learning the national anthem in all five languages. To make this feat a little easier to manage, each team received just one of the non-English segments to learn. Some participants were a little bashful about learning a song in another language, and would giggle when they tripped over the words, but everyone did their best.

Team Truth, led by Thobani Ngubaneand Braydon Rutherford, tried especially hard in their breakout room. Braydon explained the words of the song, referencing the first lines in Zulu, he said: “This whole beginning part is just

Chinny, the program managerfrom PeacePlayers Baltimore, really impressed by singing the whole first part in Zulu on her own.After all the teams came back from their breakout rooms, everyone practiced the national anthem together as a group one last time. PP-SA Area Coordinator Thobani Ngubane ended the call with a few lines of motivation for the collective group, stating “Whatever you guys want to achieve, you have the power to make it happen. You guys are the future, the next generation of our world. You guys have the power to unite us.” After a few others echoed Thobani’s sentiments, everyone said their goodbyes. That is until the whole group gets together at the Friendship Games in August!