In divided societies everywhere, language often serves as an additional barrier to friendship, empathy and understanding. But can language also be a bridge? PeacePlayers Cyprus put that to the test on Sunday April 18 when they hosted the most recent installment of this year’s Virtual Friendship Games.

Once a month, a PeacePlayers site hosts youth, alumni and coaches from around the world in team building and cultural learning activities that serve to unite our youth and give them the feeling that they are part of something greater — a global movement. 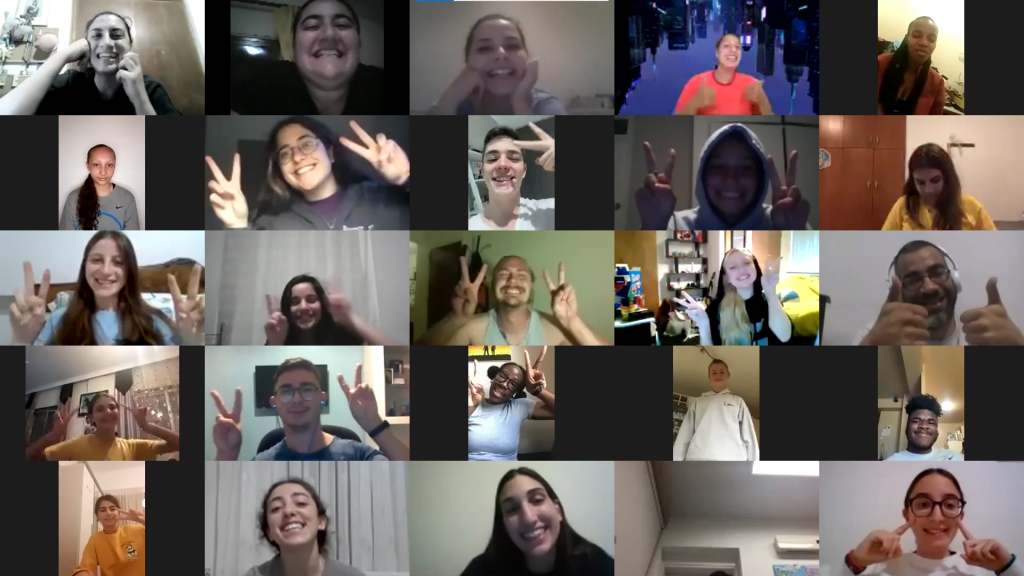 In this particular “cultural twinning,” program alumni from PeacePlayers Cyprus were at the helm, kicking off with a round of “basketball Macarena,” which added ball handling skills into the classic dance moves. After breaking the ice and getting a quick warm up, we broke into our usual teams: Mercy, Truth, Justice and Peace, where we all took a deep dive into Cyprus’ culture, language and history.

The three games that followed — Cyprus Says, Cyprus Trivia, and a Cyprus Scavenger Hunt — all touched on language, whether directly or indirectly. With every trivia question, with every scavenger hunt assignment – Cyprus alumni cited the answers in both Turkish and Greek. In addition to giving PeacePlayers from around the world a greater range of knowledge, using both languages also puts both sides of the island on equal footing, a crucial part of bridging divides.

Throughout the games, while PeacePlayers from around the world learned about Cyprus’ history, geography and most importantly, food, it became clear that many common Turkish and Greek words are strikingly similar: halloumi and hellim (famous Cypriot cheese) kapira and gabira (toasted bread) sapouni and sabun (soap) , lemoni and limon (lemon), papoutsi and pabouc (shoe), mpatania and battaniye (blanket). Mush, a PeacePlayers Cyprus Alumna who helped lead the breakout room activities for Team Mercy, remarked, “even though we’re different, we have a lot of similar things.” Despite these similarities and despite Greek and Turkish Cypriots sharing the same small Island, however divided, participants were interested to learn that it is not standard for Cypriots to learn the other side’s language, an example of how language can be used to keep people apart.

In addition to similarities between Greek and Turkish, some participants from around the world noticed similarities to their own languages as well. As part of “Cyprus Says,” where participants were asked to make certain hand gestures in response to common words or phrases from Cyprus. One such gesture was a head nod with a clicking of the tongue, which in Cyprus commonly signals the word “no.” On Team Justice, a youth participant from South Africa remarked how this also resembles the Zulu gesture for “no.”

As the event drew to a close and all the young people began to say their goodbyes, Rachel, a PeacePlayers alumna from Northern Ireland, broke her teeth trying to say goodbye in both Greek and Turkish – to a round of applause and snaps from everyone else. Because to cross that bridge, sometimes you just have to try, even if it’s hard.