What A Youth Led Movement Means to PeacePlayer Mackenzie Kyles

In the nearly two years since Mackenzie Kyles joined PeacePlayers Detroit, she has had some unforgettable experiences and made good friends. There was the field trip to a Nike-sponsored event at the YMCA in downtown Detroit, where she met tons of people, ran an obstacle course and got to enjoy  a tasty lunch from a food truck. There were the PeacePlayers U.S. Friendship Games, held in August 2019 at the Kennedy Recreation Center in Detroit, where Mackenzie got to meet young people from all over the United States, as well as from some other countries. 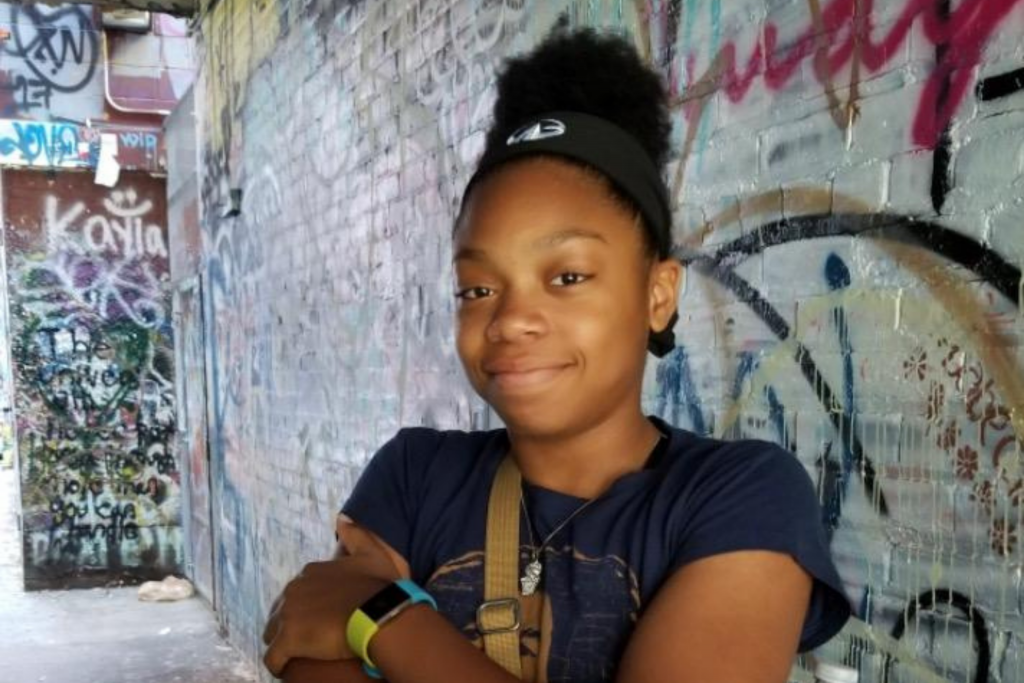 There was getting to know Carrington Boards, a Detroit teen Mackenzie met through PeacePlayers before COVID shut down in-person events. Carrington has been a lifeline for Mackenzie, someone she knows can text during these difficult times. “Carrington’s a really cool, fun person,” Mackenzie said.

The memories and the experiences that come with being part of PeacePlayers can come in big packages. Or they can be little moments that wouldn’t seem to make a lasting impression, yet hit home with the kids, who notice everything. This is also true for Mackenzie. At one of the first PeacePlayer basketball events she attended, Mackenzie and the other attendees were separated into groups. The girls, who were just getting to know each other, were asked to sit on the ground and were then instructed to stand up without the use of their hands.

It was up to the girls to figure out how to make it work. Mackenzie and her new friends eventually realized that to get everyone to stand up they would have to lock arms and work as a team to accomplish their goal. It was a lesson in supporting one another. These types of activities, which typically take place prior to a practice, are known as “Icebreakers” in the PeacePlayers community. And while they may not be as glamorous as a field trip to a Nike event in downtown Detroit, they stick with you.

This particular icebreaker was a moment that stuck with Mackenzie. “I remember that was really cool,” she said.

Detroit’s PeacePlayers program began in the communities of Southwest Detroit and Cody Rouge before expanding to Brightmoor in 2019, which is where Mackenzie joined in. When she attended her first event, she was one of only three girls there. That group has expanded to nearly two dozen kids in Brightmoor alone.

The onset of COVID shut down in-person basketball events in March, but the cohesiveness of the group was already established by then. When PeacePlayers held a virtual summer camp in July, Mackenzie and other girls participated with the same vigor as if they were on the basketball court.

“PeacePlayers helped me learn leadership skills, which really helps a lot in basketball and in life,” Mackenzie said. “But with basketball, because I’m point guard, I have to be a leader. And I have to be the one that calls the plays and tells my teammates where to go. So I feel like it really helped me in that area.”

Teaching young people how to become leaders is one of PeacePlayers’ core missions. Mackenzie loves and appreciates what she has learned but she also has the wisdom to understand the seeds were already planted long ago.

“I feel like it was always inside me,” she said. “I have always liked talking to people. So I feel like I just really need to let PeacePlayers bring it out of me. But I feel like I’ve always been a leader.”