The nervous seven-year-old girl standing alone on the basketball court at the start of a PeacePlayers Detroit practice didn’t quite know what to do. Dribbling was still a novelty to her and shooting the ball, well, that was an absolute mystery. This is where 13-year-old Carrington Boards stepped in. Not too long ago, Carrington remembered, she had been in a similar position.

With a confidence that belies her young age, Carrington gently approached and taught her new friend how to shoot. She suggested using the backboard to help guide the basketball into the net. Most importantly, she explained that giving up was not an option. 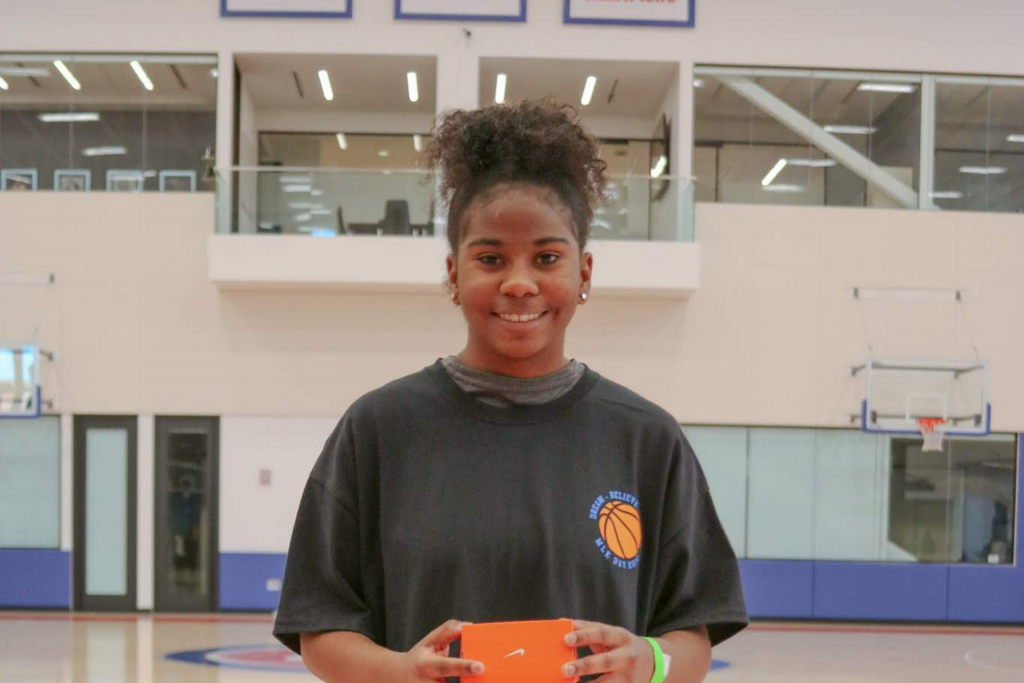 Pretty soon the young girl was making baskets. And soon after that she was no longer alone.

“At the end of practice she was playing with everybody,” Carrington said. “I thought that was really cool.”

Carrington isn’t done helping young girls develop a love for basketball and all athletics. With the help of Nike, she’s just getting started.

In January, Carrington was invited to Nike headquarters in Beaverton, Oregon, to participate in Game Growers, an initiative they started which is designed to increase girls’ access to sports. Carrington’s program, which she created with her partner, Macey, is called Girls Got Game 4 Life.

The idea is to provide a 10-week summer program for girls to gain skills in a sport so that they can keep playing it during the school year. The program covers registration fees, transportation and even goes so far as to offer tutoring for girls who are in need of extra academic help.

Carrington and the rest of the six dozen girls attending Game Growers were given the VIP treatment the entire weekend. It was hard for her to decide which part was the coolest.

It may have been having her name and idea posted for all to see. Or it could have been when all the parents were lined up inside Nike headquarters cheering for their daughter. Then again, it might have been the shoes, backpack and clothes they were given during their stay.

“It was really fun and exciting,” she said. “We were doing a lot of different drills and different ways we can improve our program. And it was just cool. I never, ever thought I would ever go to Nike headquarters. That wasn’t something that would even pop in my brain.”

After attending Game Growers, Carrington returned to Detroit, and in February, ran a test pilot of the program. It offered basketball and soccer to 15 girls and was everything Carrington hoped it would be.

“I’m really proud of it,” she said. “I feel like when I play basketball with boys they sometimes discriminate against you because you’re a girl even though they don’t know what your ability is. You can be really good and they still wouldn’t pick you. And I’ve experienced that before. It takes them a minute to see how you can play and then they’ll let you on their team. But it shouldn’t be like that.

“I feel like a lot of girls don’t like playing sports because they may play with boys and feel discouraged. I like that I could do this program because it’s something that I believe in.”

Carrington was supposed to visit Israel this summer and participate in PeacePlayers’ Global Friendship Games but it was canceled due to the COVID-19 pandemic. A virtual event took place over the summer that, while perhaps not as exciting as an overseas adventure, created opportunities to meet new people around the world. She’s even stayed in contact with one girl who lives in Northern Ireland.

But Carrington’s heart is still in Detroit. It’s there where she overcame her youthful shyness to become a role model for young girls who love sports. And she has a message for any of them who think sports aren’t for them.

“I want them not to give up,” Carrington said. “Even though someone might say, ‘Oh, you’re a girl, you can’t do it.’ Girls can do it. Girls can do as much as boys can do.”

And often much, much more.