Andrea Johnson: Laying the Foundation for the Next Generation

As a child, Andrea Johnson’s days and nights growing up in Roseland were filled with the sounds and sights of sport.

Not many days went by without baseball, basketball or some other physical activity nourishing her body and soul. So it’s no surprise that Johnson, the manager of PeacePlayers’ Chicago, chose to devote her life to giving children the same dreams and memories. 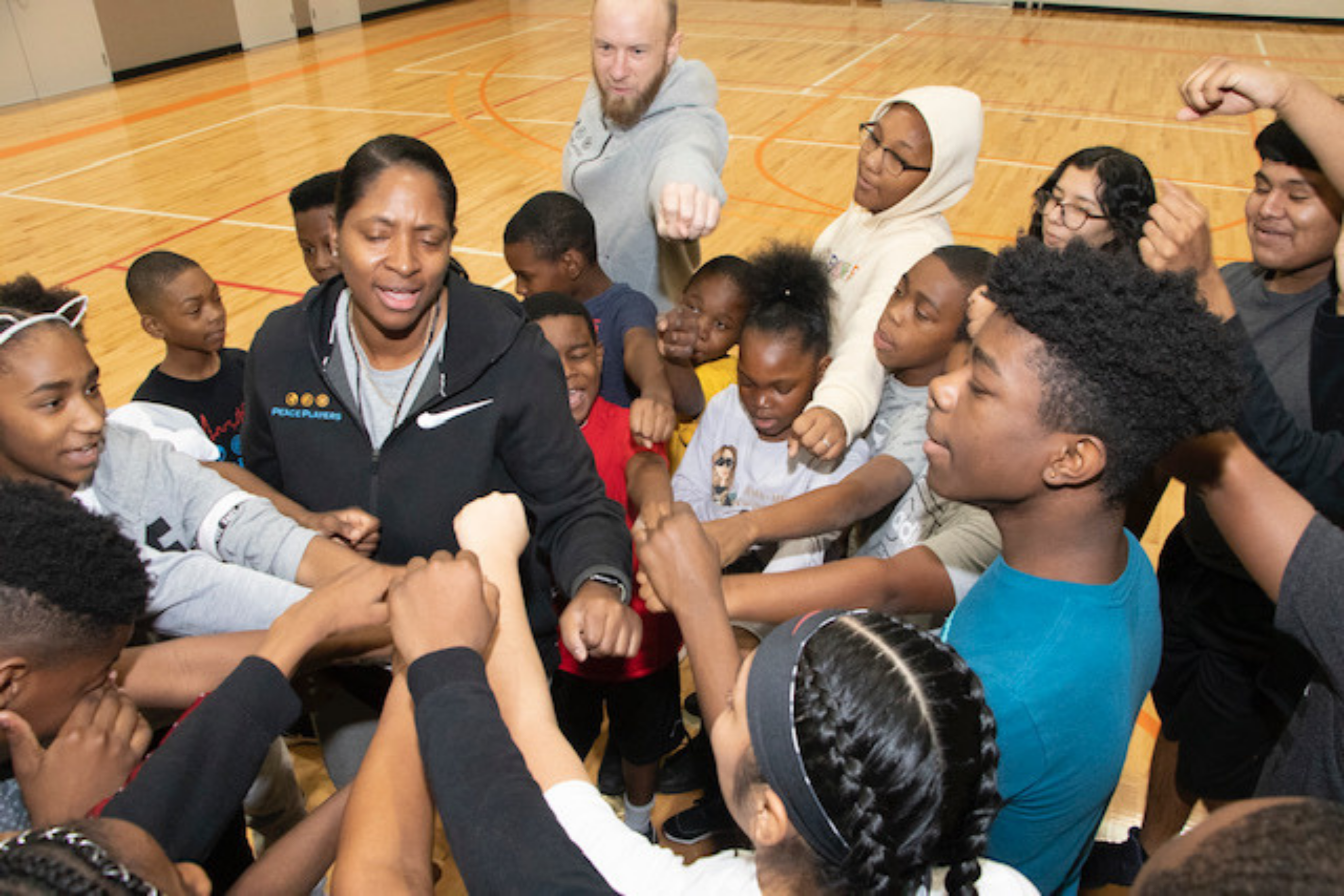 The thing that keeps me going, that charges my battery, is seeing kids laugh and play and have fun.

Andrea was raised on 112th Street between Wentworth and State St. in an environment full of sports and, well, a lot of boys. Her two brothers challenged her daily, which helped when she discovered that the only basketball team at Curtis Elementary School was an all-boys team. So that’s the one she joined.

When Andrea first began to find a world outside of Roseland, she was just 14. Instead of going to Julian, she was accepted at Whitney Young High School, and her parents insisted she attend.

Basketball led her to Florida’s Palm Beach Community College for two memorable seasons — she played on a powerhouse team with former WNBA MVP Yolanda Griffith — then back to the University of Illinois at Chicago (UIC) to finish up her college career and earn a degree in kinesiology.

It was at UIC that Andrea’s love for helping young people began to develop. One of her professors brought the class to Englewood to work with at-risk kids twice a week. They would take them on field trips, plan activities and teach them life lessons through basketball.

Two of the boys — Jannero and Jeremy Pargo — made a strong impression on Andrea. They had an obvious talent for basketball but she could also see that by providing them a chance to see a world that existed beyond Englewood, they were getting a chance to expand their view of what was possible.

A few years later, while she was helping out at one of Chicago’s summer basketball leagues, a young man approached Andrea.

“Someone tapped me on the shoulder,” she said. “Coach Johnson!” And I turned around and it was one of the little boys. Well, he wasn’t a little boy anymore. And he told me he had just been signed by the Lakers.”

That man was Jannero Pargo, who is now an assistant coach with the Portland Trailblazers after playing 11 seasons in the NBA. Jeremy Pargo also reached the NBA and continues to play professionally overseas.

“From that point on I knew that basketball and what we were doing changed lives,” Andrea said. “That started to instill something in me. How can I give this opportunity to other kids?”

After spending an incredibly rewarding 12 years working for Nike, Andrea made the decision to join PeacePlayers and continue her mission of helping young people. It’s a responsibility she never takes for granted both as a community leader and the mother of a 13-year-old daughter.

“Kids need to have access to positive role models,” she said. “Being a resource for them and being an advocate for them just makes them better people. We’ve been able to do that at PeacePlayers and I’m incredibly grateful for the challenge and the opportunity.”