How Female Role Models Are Changing the Game in Brooklyn

The event on the basketball court at Nike headquarters in midtown Manhattan began, as they typically do, with the young women excitedly talking to one another and taking a few warm-up shots.

Then something happened that wasn’t so typical. A song by rapper Pop Smoke started blasting over the loudspeaker. The players stopped what they were doing, and a pre-game shootaround turned into a spontaneous and raucous dance session.

Nike Community Ambassador Allie Moogan, drawn in by the joy she was witnessing, quickly joined in and became part of this wonderful moment that she hasn’t forgotten.

“It was a super fun thing to do before everything started,” Moogan said. 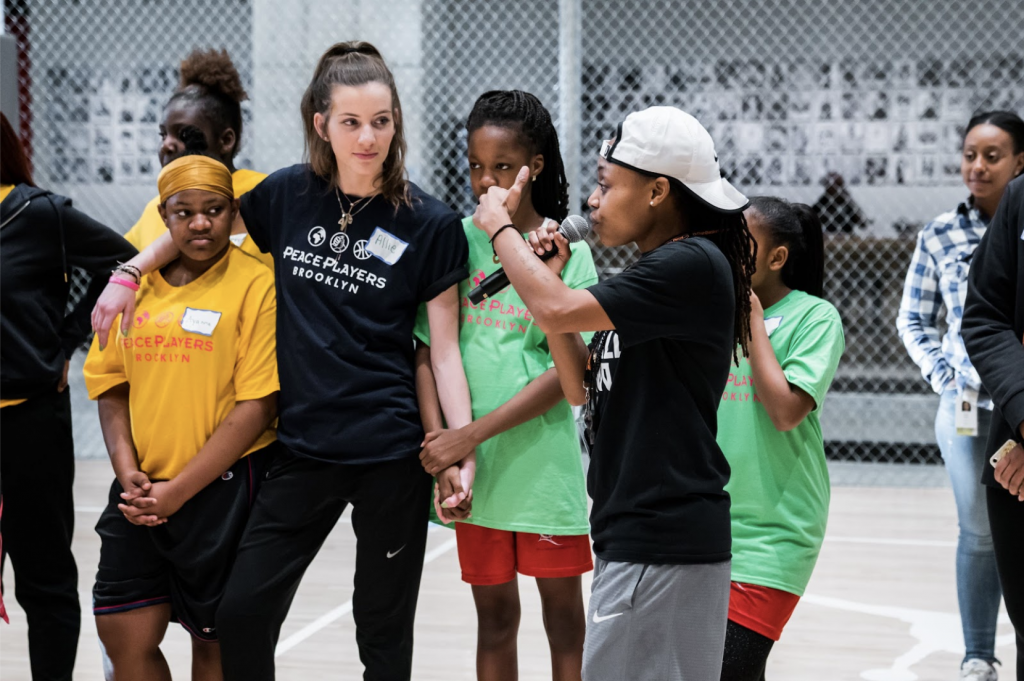 Moogan, 23, is one of many Nike Community Ambassadors who has built a close relationship with PeacePlayers and the kids who depend on it for support and guidance. While all the volunteers have made an impact, Moogan’s magnetic and vivacious personality has stood out since she first began to donate her time over two years ago.

Sally Nnamani, U.S. Director of Programs & Partnerships at PeacePlayers, enlisted Moogan to speak the first time she came to an event. Moogan spoke from the heart, as she always does, but away from the microphone something else was happening.

“There were so many volunteers there that day, and Allie was the one person that the kids remembered,” Nnamani said. “Between the two schools that we work with, Allie’s the name that will come up. And so I think that just speaks to the passion that she brings. She is authentic and caring about working with young people. And it shows.”

Moogan’s decision to make basketball a key part of her adult life isn’t a surprise considering it was such a big part of her youth. After playing in high school, she played all four years at Brooklyn College before graduating with a degree in business management.

Division III programs don’t draw very large crowds, so Moogan would typically play in front of a few friends, family and classmates. And little more than that. Then one day, shortly after working with PeacePlayers for the first time, she arrived at a game to find her very own cheering section.

“Brooklyn College is literally down the block from the Nike Flatbush store. So a lot of the same girls that I saw at the Nike PeacePlayers event went to my game. They were just like, okay, we’re gonna watch Allie play. And then they brought their high school friends who weren’t in the actual PeacePlayers program but they wanted to come watch someone that they knew play basketball. I felt like I had fans. I felt so happy.”

Moogan recognizes the impact she can have on the lives of the girls in the PeacePlayers program and wants to be a role model for them even if their backgrounds aren’t entirely the same. Having people like her involved supports and advances the work PeacePlayers is doing within the community.

“A lot of our girls do not have interactions with white people on a daily basis,” Nnamani said. “And the ones they have interaction with are teachers and people in positions of power. And so that relationship may not always be authentic. I think the experience they have with Allie is, this is somebody who is like their older sister. Even though she’s white, she is someone they can see themselves getting along with.

“What Allie is doing is so cool because it fits with the work we’re doing in Brooklyn engaging communities and housing developments. As our program gets stronger and grows, we want to start looking at racial divides and how we’re creating space for black and white young people from different parts of Brooklyn, who are residing in different neighborhoods because of their socio-economic status, to get together.”

As a Nike employee, Moogan has the best of both worlds. She earns her living with an established company she deeply admires and hopes to work with for a long time, while also helping to grow PeacePlayers. The two organizations are both dedicated to using sport to bridge divides between communities.

That knowledge that PeacePlayers is working towards helping young people on a grand scale is an essential part of the program. But it only works because people like Moogan are making a huge difference with individuals, one person at a time.

“I try my best to be super down to earth with these girls,” she said. “And I think that shows through in how I act towards them and how I act within myself that I do give off the older sister kind of vibe. I do want them to feel comfortable with me because they might not have many interactions with white women like myself. But being a constant person who they can go to, who they can dance with in the middle of a court without having to wonder why she is dancing with me.

“It shows that me and those girls have a lot in common, and having fun and being joyous in what we’re doing is our top priority.”