As the COVID-19 pandemic continues to threaten cities throughout the United States, at PeacePlayers, we have adapted to provide virtual programming for our young people. Each week, teammates gather on a Zoom call to touch base and participate in different activities from at-home basketball drills to conversations about remaining resilient in the face of adversity.

For some of the weekly calls, PeacePlayers teams from different cities have been able to come together, helping to show the young people involved that being a part of PeacePlayers goes beyond their individual cities.

“We need to talk more in these sessions,” Noah said. 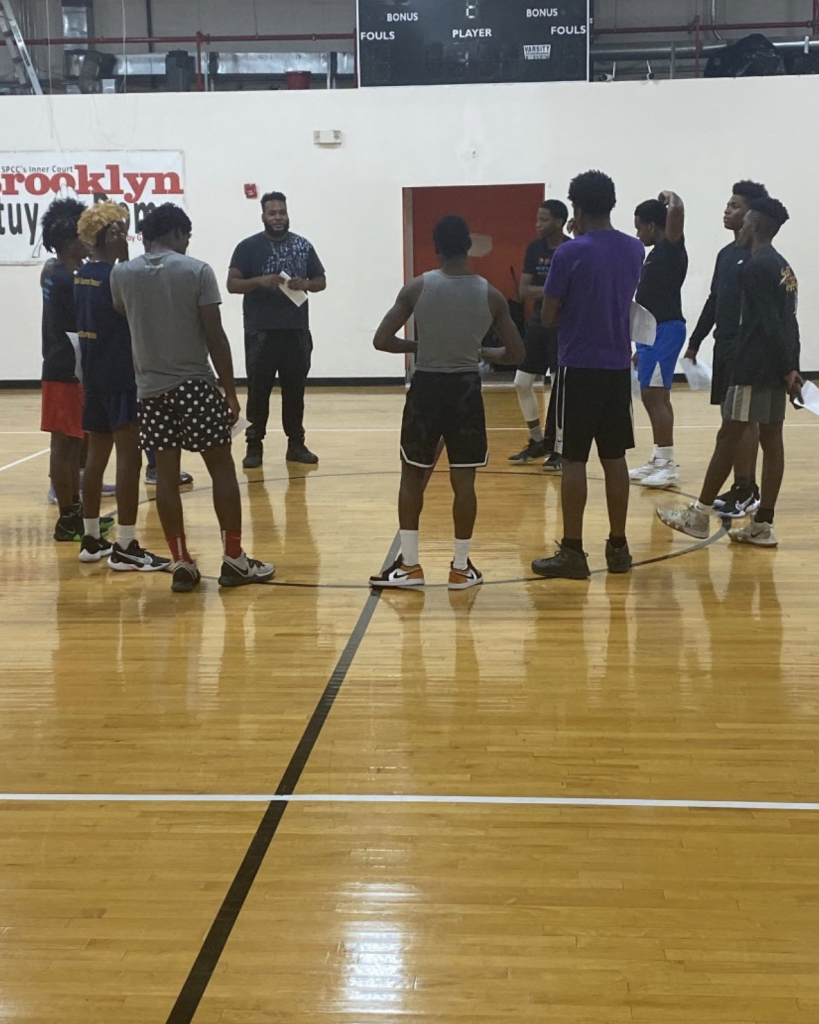 These comments came as a surprise to Sally. Especially from Noah, someone who had always been shy with new people around. And, despite the presence of the newcomers to his team practice, he remained adamant that the team needed to talk more about what he described as, “personal stuff.”

He wanted his teammates to have the opportunity to open up about their lives at home. Noah and his teammates all live in Brownsville, Brooklyn, an area with the most housing projects per capita in the country. In Brownsville, many young men and women feel the need to hide their emotions behind a tough exterior to protect themselves, and Sally’s team was no different. That was, until they met Frank.

Franklyn Mena is what one could describe as a swiss army knife of wellness empowerment. Like the players on Sally’s team, he was born and raised in Brownsville. From his upbringing, Frank knows the struggle that young boys and girls go through as they navigate adolescence in Brownsville.

“My cousin was in and out of jail after he was caught with a gun. He ended up in a halfway house and when he came home he wasn’t the same and later committed suicide. He had a lot of psychological and social issues there weren’t spoken about.”

Frank realizes that many of the young people that participate in PeacePlayers Brooklyn are dealing with similar struggles.

“The way you dress, speak, carry yourself, you might be labelled as this or that,” Frank said. “Between that and prevalent racism in society, it all affects their self-confidence.”

He talks about how guarded many of these young people are as they attempt to protect themselves from the divisiveness that they experience on a daily basis. For these reasons, Frank has dedicated his adult life towards empowering people in his community to find their calling, whatever that may be.

Frank co-founded his organization, called Universe City, with his brother and two other women. Universe City doubles as an indoor urban farm as well as a co-working space for “agriculturists, artists, activists, entrepreneurs, techies, and the curious.” He and his brother had dreamed of having their own space where people could follow their passions, and they turned that dream into Universe City.

Through a network of mutual connections, Frank ended up meeting Sally, who invited him to join PeacePlayers’ 2019 annual Martin Luther King Jr. Day event to run a session on mental health. From there, Frank came out for many PeacePlayers’ practices, where he would run sessions.

To the boys on Sally’s team, he represented a male figure who gave them the opportunity to open up and be vulnerable. To the girls, he was seen as an ally supporting them in owning who they are as people in the world and demonstrating what healthy relationships look like.

Frank has an uncanny ability to connect with the PeacePlayers youth. He explained that “some of the best conversations we would have were talking about fathers, mothers, grandmothers, triggers, and racism that they deal with in school.”

These topics remain particularly relevant today as Black Lives Matter protests and rallies permeate throughout hundreds of cities in the United States. Frank understood the importance of helping young people confront these societal realities and be able to open up about them.

“I’ve been advocating for Black Lives Matter and people that look like me for a while now,” Frank said. Because I think in this society black people and people of color just get lost in the sauce. Because a lot of the time we’re the laborers, we’re the servers, and those are the people who don’t always get acknowledged or have a voice in those political arenas. We don’t always have a voice in there. Institutional racism is a real thing.

“Me and Sally make sure we talk about it with our students, because racism is real. People don’t always know that they’re racists, they don’t always know they have an inkling of what their biases are. What that basically means is we have to be more prepared so that we come with facts and don’t react to certain misunderstandings that someone might approach us with.”

Sally credits these conversations with helping to bring her team closer together. Frank always told the team to “think bigger, think about joy, comfort, love” and to always be broadening their vision. Using himself as an example, he talks to them about entrepreneurship and making a difference in the community. Sally recalls Frank’s sessions having a big impact on the program.

“They allowed us to be vulnerable beyond day-to-day stuff and to see beyond that,” Sally said. “It’s extremely important for the work we are doing using basketball to bridge divides in the community. It helped us be welcoming as new people joined our team.”

One of the young people most impacted by Frank’s presence was Noah, who began to look up to Frank as though he were his big brother. At first, Noah was hesitant to open up to the group when they would dive into these deeper topics.

However, Frank helped bring Noah out of his comfort zone, to the point where Noah will call Sally up and speak for over an hour, advocating for more openness during their team practices. As such, Noah is leading by example and helping to make sure that PeacePlayers is not only a place for their team to come together and play basketball, but a place where they all feel comfortable working through life’s most challenging issues.

As the COVID-19 pandemic continues to devastate communities in New York and across the country, Frank and his team are working diligently to feed the Brownsville community through his urban farm. At its peak, they have delivered 2,500 to 3,000 boxes of food on a weekly basis. He describes how in Brownsville, “stores are empty, there’s nothing on the shelves.”

For his home community, Frank is providing an essential service and he’s doing what he can to help get the word out. He was recently featured in The Washington Post and on CBS This Morning.

You can get involved and support Frank and Universe City during these unprecedented times by donating to their GoFundMe called “Grow Brownsville.” All proceeds will go towards increasing Universe City’s capacity to deliver fresh, locally grown food, to the residents of Brownsville.