The Jerusalem All-Stars: A Tale of Two Cities

Jerusalem, 2011. An imaginary border divides Jerusalem into two, separating East from  West, Palestinian from Israeli. This border is as real and daunting as the fence that ran  through the city before the 1967 War. East and West Jerusalem are not just separated by  geography; they are separated by language, ethnicity, religion and nationality. On the rare  occasions when East and West do meet, it is most often an encounter governed by hostility, contention and even violence. Jerusalem, 2010, was rife with Israeli settler expansion, violent protests in Palestinian neighborhoods, and the expulsion of several Palestinian families from  their ancestral homes. We may at be the start of a new year, but the old conflict still pervades  the streets of this city. 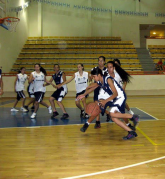 Jerusalem, 2011, however, is also a place of hope. The Jerusalem   All-Stars, an unlikely union of Palestinian and Israeli teenaged  girls forged in the universality of basketball, embodies this hope. Nearly every day of the week, 24 young women leave their segregated neighborhoods and meet in a gym on the border of East and West Jerusalem, to shoot hoops in peace. The Jerusalem All-Stars aren’t just playing ball; they’re changing history. As the first two integrated Palestinian-Israeli Jerusalem teams ever to compete in the Israeli Basketball Association’s elite youth league, the Jerusalem All-Stars are changing the rules of the game. And they’re winning. Both All Star teams are currently in the top three in each of their respective age brackets. Although PeacePlayers Middle East has been active in Jerusalem since 2005, this marks its first foray into league sports,  raising the stakes by bringing its successful social experiment into the public sphere. 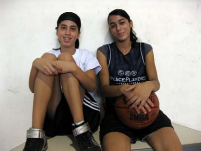 A sort of David and Goliath effect occurs at Jerusalem All-Stars games. Opposing teams are often taller, stronger and more veteran. But the All-Stars are hungrier. As the city’s first integrated team, winning  stacks up to more than just rank and bragging rights; it translates into a victory for cooperation and trust across the deep fault-lines separating the city. And not everyone is happy about it: The Jerusalem All-Stars are often faced with low-level hostility from parents and coaches of opposing teams, with taunts of “You don’t belong here” being too frequent a reaction to an All Stars win. Fortunately, these young women know that the best remedy for adversity is victory.

As a team, these young women form a new identity for themselves, one that defies national  and religious affiliations. It is impossible to distinguish Palestinian player from Israeli player, with the baggage of national identities sublimated by the team uniform. From the  stands, a flurry of Hebrew, Arabic and English can be heard, with players using combinations of all three to communicate. Despite not speaking the same language, on the court, basketball is all they need to be understood.

At the end of the game, the Jerusalem All Stars shake hands with their opponents. Before exiting the court and heading home to neighborhoods on opposite sides of the city, the All-Stars stand in a circle and let out a resounding “PeacePlayers!” as their final battle call.

Yes. Jerusalem, 2011, is a divided city, but one in which peace can still be a winning game. Tales from the Court:

Juman (12) and Malak (11) are sisters from Palestinian East Jerusalem who have been a part  of PeacePlayers for the past three years. The girls hail from Shuafat, a neighborhood  bordering on the Shuafat refugee camp, which suffers from a lack of municipal planning,  overcrowding, and potholed roads. Recent headlines shed light on the violent tension that  plagues the neighborhood:

May 12, 2010 (Ynet News): “A group of 60 Jews marching in Jerusalem on Wednesday  afternoon were pelted with stones after taking a wrong turn and entering the Arab  neighborhood of Shuafat…The neighborhood’s residents began hurling stones at the  unwelcome visitors. One of the Jews, in his 20s, pulled out a gun and fired in the air. Police  forces dispatched to the area removed the group to the French Hill area.”

Despite the dismal reality of daily life, Juman and Malak keep a sunny disposition and find  refuge in sports, in spite of the fact that it is a pursuit that is not “traditionally” acceptable for young women in their community. They are petite, agile girls with more of a passion for  basketball than politics. Both sisters, who are outstanding athletes, play on the same team,  which, according to Juman is “sometimes ok.” Although she is tiny, Juman is fast; the coach  has even asked her to play on the older Jerusalem All-Stars team, which is made up of 13 – 15 year olds, because she’s just that good.

Juman and Malak have also brought their family into the fold, and their father is in the  stands at almost every game, cheering them on to victory. Juman believes that being part of  PeacePlayers is important: “It’s good for the future because it shows another side of other  religions. And it’s basketball!”

Gal (15) comes from an Orthodox Jewish family in the Jerusalem suburb of Beit Shemesh, a  town with staggering population growth and one of the highest immigrant populations in Israel, including immigrants from the Former Soviet Union and Ethiopia in addition to ultra Orthodox immigrants from the United States. The city’s popularly elected local leadership  belongs to a side of the political spectrum known to be less than sympathetic to the Arab  population.

Gal’s family shows a side of Israeli society that often escapes the headlines, one that is  struggling under the weight of the country’s fiercely competitive brand of capitalism; they  have also been less than pleased by her participation in the integrated league, and her father,  a stern ultra-Orthodox man with a long black beard, forbid Gal from playing basketball with  Arabs. Gal decided, however, that the opportunity presented by the Jerusalem All-Stars was  worth defying her parents’ wishes.

Although she is now a proud PeacePlayer, it wasn’t always that way. When Gal first joined PeacePlayers, it was because the program offered basketball activities that her parents could afford; not because she was particularly interested in meeting Palestinians. In fact, she was terrified to be in close physical contact with Palestinian girls at her first integrated PeacePlayers event in 2006. Now, Gal is a proud member of the Jerusalem All-Stars, hi-fiving her fellow players after every basket, regardless of their national or religious affiliations. She even takes a 40-minute train ride by  herself 3 to 4 times a week to practice and play with her Palestinian teammates. 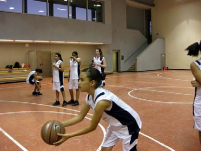 Efrat (13) is a petite, toothpick-thin girl from West Jerusalem who has been with PPI – ME  for the past three years. Her school is located right across the road from a Palestinian  neighborhood, but she had never interacted with Palestinian children until joining  PeacePlayers. What she lacks in size, Efrat makes up for in spunk. When she first came on  board, she was in it more for the basketball than the for opportunity to meet Arab girls.

Efrat, too, has grown up in challenging family conditions, having been adopted from Romania as an infant, and raised by a single mother in not the most generous of financial  circumstances. Despite this, Efrat is an energetic and exceedingly positive girl. Efrat is totally  colorblind, and makes absolutely no distinction between her Jewish and Arab counterparts.  “Everyone’s really nice,” she says. Efrat is thrilled to be in second place in her division, and  owes her team’s success to her coach, a young Arab man from East Jerusalem. According to  Efrat, the only thing scary about playing with the Jerusalem All-Stars is that “the girls on the  other teams are so big!”

Efrat’s mother frequently expresses her appreciation for basketball and for PeacePlayers. Her  mother describes her as a special girl, but one with “problems,” referring to her lack of  concentration and social skills. She feels that Efrat’s involvement in PeacePlayers has given  her self-confidence and helped her capacity for building friendships.

Seewie (13) grew up in the Arab neighborhood of Beit Safafa, which lines the border  between East and West Jerusalem and serves as a painful example of the division of the city.  Between Israel’s founding in 1948 and the war of 1967, Beit Safafa was split in two, with a  fence running down the middle, splitting up families in this close-knit community on two  sides of the Israel-Jordan border. In 1967, Israel annexed East Jerusalem, and the residents of  Beit Safafa were reunited, but under Israeli rule. Until today, many of the residents hold  Jordanian passports and are not citizens of Israel.

Seewie’s father is a driver, and her mother, as is traditional in the community, is a home maker, who is already raising 4 children in her early 30’s. During her time with PeacePlayers Middle East, in  general, and with the Jerusalem All-Stars, in particular, Seewie has gained a newfound  confidence, says her coach in the league. For Seewie and the girls of her community,  competitive sports are not a natural option. In fact, many of the girls from the neighborhood  who joined PeacePlayers Middle East together with Seewie bent to pressures from the community that  condemned the participation of women in sports. If you ask Seewie, however, she’ll say that  basketball is one of the most important things in her life.