For 6 years, Coach Bill Fenlon of the DePauw University Men’s Basketball team and his wife Gigi Jennewein has been bringing student-athletes from DePauw to Northern Ireland for an exchange with PeacePlayers – Northern Ireland.  2020 would have been the 7th exchange, but as with most things that were planned for the Spring and Summer of 2020, the trip had to be called off due to the Covid-19 pandemic.

The DePauw Exchange started out as a “passing idea” that Coach Bill and a colleague scrapped together.  It eventually became an extended credit course for DePauw students, which Gigi says is now one of the most sought after courses in DePauw.  “Students are clamouring to be a part of the course that we actually have to turn some of them away.”  This speaks volumes to not just the fun that is being had, but to the value of the experience as a whole.  This value is reciprocated and felt tenfold by PeacePlayers. The student-athletes raise a great deal of money that helps to fund the Summer Jam tournament; they also volunteer their time as coaches on twinnings and the Belfast Interface League alongside PeacePlayers coaches.  For many young people (and coaches/staff), it is their favourite time of year.  “There is a buzz about the air.  I can’t quite explain it, but the energy from the staff, coaches and kids wildly increases when DePauw gets here. I love it” says international fellow, Leif. As PeacePlayers has found in its programming, having fun is the best way to break the ice between people that are meeting each other for the first time.  The North Coast Residential is that ice-breaker that helps to facilitate and encourage mutual learning between PeacePlayers coaches and students from DePauw.  As former coach Ruairi describes it, “you are pretty much thrown into the deep end in terms of getting to know the DePauw ones.  You quickly discover they are just like any other student you’d meet in Belfast.”  Coach Adam adds, “I learned that not all Americans love McDonald’s, eat candy all of the time or go to Disneyland every weekend… and they don’t have to wear a uniform to school!”  It is during this trip that the coaches and students often find something mutual to discuss, which of course is, basketball.

For the basketball players from DePauw, Coach Bill talks about how one of the biggest shocks they experience is seeing first-hand how basketball – outside of

PeacePlayers – does not play a larger role within Northern Irish culture.  Luckily, many of the PeacePlayers coaches would not be involved if they did not have some passion for basketball.  These small similarities between the coaches and students allow them to bond even further.

According to Coach Adam,  the role basketball plays in getting to know each other is very important, “Basketball is what brought us together… it was something that was a mutual interest and a topic of conversation from the beginning.  Having that one connection led to learning so much more about the students and really have some great conversations.”

The fun that is had throughout the week whether they’re coaching together on twinnings or enjoying each other’s company in their free time, the relationships that are formed during the exchange are often quite powerful.  “I was so surprised to create such a strong connection with people who lived thousands of miles away in just over a week. It made me realise that I was so used to being in the bubble of ‘our wee country’,” says Adam.  That mutual feeling is also felt by the DePauw students, says Gigi,  “The many relationships formed is so rewarding to see and very much valued.  Leaving each year is always so tough.” 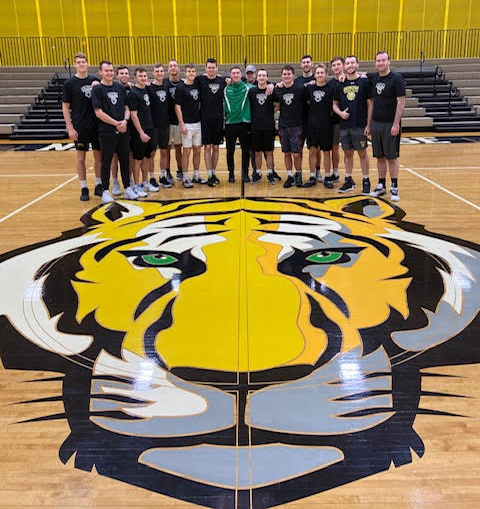 These strong connections have led to PeacePlayers coaches to eventually make a reverse exchange and visit their new American friends, in America.  For Ruairi, he chose to visit during a unique time of year for DePauw, “I decided to visit for Bell week, which is when they [DePauw] play their rivals Wabash in American football for the Monon Bell.  It was great to catch up with friends who I’d met from previous years and of course Coach Fen.”  Coach Bill on PeacePlayers coaches visiting DePauw, “Well its always a surprise; no one tells me! I’ll be at practice and turn around and there’s Ruairi or Adam.”  Gigi chimes in, “We want more of them to come over and visit!”

The overall value of the DePauw-PeacePlayers Exchange is not lost on coach Adam and Ruairi.  “I think some of us are guilty of being too comfortable and not realising how much more life has to give,” says Adam.  He continues, “PeacePlayers provides young people with so many amazing opportunities through the sport of basketball.  I know for some people it may seem a bit daunting or uncomfortable to meet new people from the other side of the world but if you step out of your comfort zone for just a few seconds and have that first conversation that makes you realise you both have similar interests, the opportunities are so exciting.”  Ruairi simply adds, “All I can say is make the most of the exchange, it may only be a week of your life but it could lead to a lifetime of friendships.”  Powerful statements for what initially started out as a “passing id

Six years, 106 students, over thirty-five thousand dollars raised and loads of fun later the relationship between DePauw University and PeacePlayers – Northern Ireland could not be stronger.  Many lasting friendships and incredible memories have been formed.  Coach Bill offers these final words, “if someone comes up to you with a crazy idea, and you like it, you should flesh it out and not be afraid to run with it.”